Only a couple of days left in this year so I guess I can go ahead and post the review. Definitely a year of highs and lows but as always I like to focus on the good and leave the negative behind and move forward.

Here is a link to my post on the first half of the year.


July :
This was a good month for me. I had my highest mileage month of the year and was well on my way to my highest  yearly total. I returned once again to one of my favorite events , The Grandfather Mountain Marathon. It was special this year, not because I had a great run although I think I felt better than almost any other year I have run it other than 2006. What made it special was that there were 4 of my Angels running and I got to run at least a few miles with all of them and shared the whole race with Jenn in her first time in the race. I had  especially wanted to because she had run the reverse with me when I did the double in 2010. 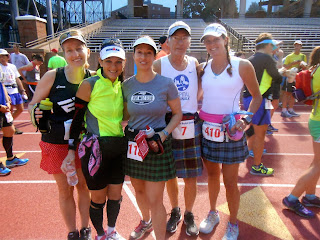 Aug:
I started off the month with a fast 5K and 2nd place in my age group but it was the beginning of the downfall of my running for the next several months. I would have been fine because no damage was done in the race but the stupid stuff I did over the next three days all came together to injure my hamstring. I took it easy for the next couple of weeks but probably should not have run any before heading to NY and the Beast of Burden 100. The pain was bad from the first few miles and eventually the leg just gave out on me and I had to drop at mile 37.5. It was still a great trip sharing the journey with Jenn and visiting Niagara Falls. 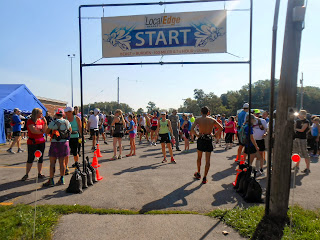 Sept:
I gave the leg a lot of rest and it was getting much better as the middle of the month came and I was preparing to run The Run For The Fallen Half Marathon. The leg had felt much better in the days before and I was pain free during the warmup but within the first mile the other leg began hurting, I assume from over compensating from the other leg injury. By the time it was over I had to slow way down thanks to the pain and the leg refusing to move at the pace I wanted. I was well on the way to first time under 1:40 since 2006 so it was frustrating but the worst thing was that I was now injured worse than before. 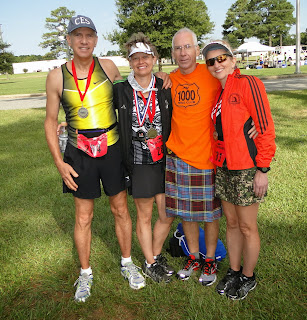 Oct:
Again I had to cut way back on my running but I had a BQ attempt at The Wineglass Marathon in Corning NY in the first weekend of the month. I could only hope to get through it without making things worse. My conditioning was not nearly what I had hoped due to the lower mileage and inability to do any fast paced training   since August. The first 15 turned out better than expected. Very little pain and on BQ pace and feeling good but suddenly at mile 16 the leg just gave out on me and sharp pain followed. Once again disappointing but another great trip to a beautiful area with friends Karla and Frank and Rebecca and Ronnie. 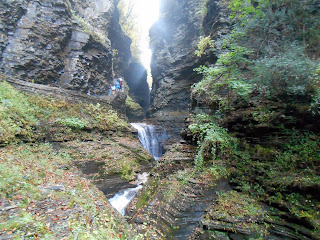 Two weeks later I had a very important race to run, the Tussey Mountainback 50 miler in State College PA. I needed it as my last chance to qualify for the Western States lottery . I didn't run a step in the two weeks between races and was just hoping and praying the leg would hold up to the finish and that I was still in condition to run the necessary time to qualify. Finally a success ! I was in pain pretty much the whole time but otherwise I felt very good and was able to maintain the pace I needed and the leg held up. And amazingly enough the pain actually eased off the last 10 miles and it seemed to be the beginning of the injury actually starting to improve ! 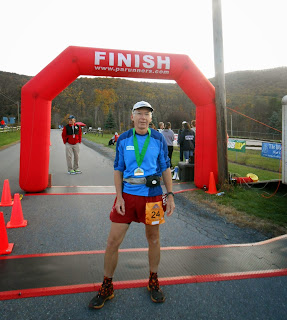 I mostly took it easy after the 50 miler but gradually worked my mileage up a bit   leading up to the OBX marathon. The leg was improving some but some days were better than others and I was still having some pain. My only goal was to run the race with Karla and have fun and not hurt. I ran the first two miles with Amy just for fun and to get her on pace for her BQ attempt and then dropped back to run the rest of the day with Karla. We had some fun but my conditioning was down and I had a slow recovery from the 50 miler so  had to let her go at mile 16 . At least I was able to run it with almost no pain at all and was no worse afterwards and like  after the 50 it seemed to be improving even more.   Another great trip with friends as I was once again a guest of the Howells, and was able to share much of the time with Amy, Karla and Frank. 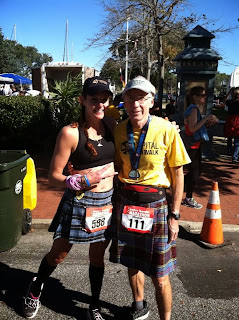 My last planned event was to return for my 10th consecutive Derby 50k and get my  special finishers chair. I was successful in  that I  felt good, had fun and ran pain-free ! 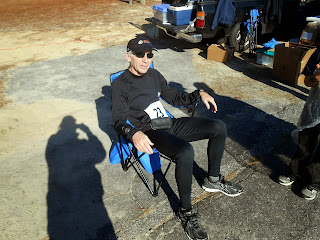 No events but I am happy just to be running nd training normally again. I was afraid that with the injury as bad as it was in Sept and Oct that if I could just make it through Derby that I would have to take off a month like I did at the end of 2008 to  let things heal up and start over again. So you can imagine how happy I am that instead I am already over 200 miles for the month for the first time since July and I am actually able to be training for a BQ attempt at Myrtle Beach in February. But that's another story !