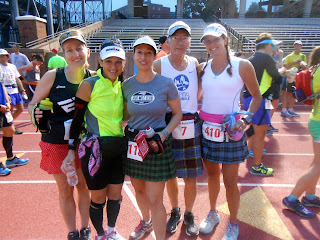 Had a great trip up to Boone this year and had a lot of fun and got in a great workout.  I've been running very well recently and the idea of racing it and maybe going for a sub 4 had crossed my mind, but I decided to go ahead and stick with my original plan and run with Jenn. After dropping at mile 48 at Bighorn , I only took one rest day and then ran 50, 64 and 64 mile weeks leading up to the race and only took the Friday off before the race so it would not have been smart to race it anyway.

Jenn had accompanied me down the mountain when I did my double back in 2010 and I had always hoped if she ever got around to actually running in the race that I wanted to share it with her. Two other of the Angels, Amy and Margo were also running it for their first times  and I was hoping that we could all stick close together for as long as possible. Lisa was back again too but Karla and Laura were not here this year. We lined up on the track on a nice cool morning, about 59F and were soon circling the track and out onto the roads. I had really expected Margo to be way ahead and pushing the pace but she was right in front of us as Jenn, Amy, Lisa and I were all together. Just past mile 2 we began the first climb and I could tell Amy was working too hard for the pace. I was a bit sad that by mile 4 she and Lisa were both dropping behind. I had hoped to stay together at least until mile 10 so we could get a picture at the traditional spot. After this year , all of the Angels have run the race with me at least once and had our pictures taken there but Amy will have to wait  until another time. 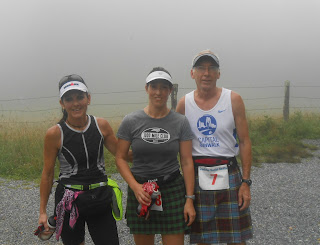 Jenn was running well and we were having a great time and I was happy that Margo was able to run quite a bit with us. We did stop at mile 10 for the photo but with the fog once again there were no views of the mountain this year. Soon after we were on the parkway and enjoying the nice downhill to the halfway point. I was feeling great and the pace felt very easy to me. We passed the half in about 2:13 and then began the climbing again. Once we got to the mile 15ish aid station Margo began to pull head of us and not long after we lost sight of here.

Just before 17 hill we caught up to my young cousin Andy Sicard who is a park ranger at Grandfather Mountain State Park. He used to run a lot but quit competing 7 or 8 years ago but decided he wanted to run the marathon for the first time.   Talked to him for a minute and introduced him to Jenn and then we were off again.

Jenn continued to move along at a good pace as we hit hwy 221. I was still feeling great just enjoying getting in a great workout and sharing the miles with her. The weather was great this year. It was quite a bit humid but the temperature stayed in the mid 60's and there was a breeze most of those last  7 or 8 miles. We were on pace to run about 4:35 I guessed but by mile 22 Jenn began to walk a lot more on the hills that earlier we would have been running. 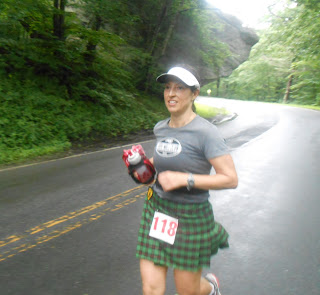 Finally made it to the games and ran strong to the end finishing in 4:41:42. Despite  the easy pace and a lot of walking in the end, that was still my 2nd fastest time by 10 seconds 8 finishes ! That just shows how well my training has been going. We walked down to the finishers tent and I got a cup of gatorade and then headed back out on the course to go find Amy. I was really a bit surprised at how great I felt as I ran back looking for he. This would have been a great year for me to do the double. I was 15 minutes faster finishing the race, I felt a lot better and the weather was cool compared to the mid 80's in the afternoon of 2010. 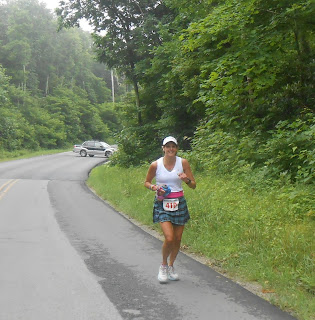 I was happy that I didn't have to go too far  to find Amy. She had about 3/4 mile to go when  I found her and she had a big smile when she saw me. Although she was hurting a bit from the effort, she ran strong all the way to the end  and I was happy to at least share the finish with her. Got to finish one of my favorite events twice with two different Angels in one day !

Wonderful weekend with friends and the next day I had practically zero soreness, no more than a normal long run. I took off Sunday and right back to normal training on Monday. A very good sign that my training is on track for some big things to come ! Stay tuned !
Posted by runjoey at 5:18 AM

Hi, I'm one of 2 Asians you met on the shuttle back to the stadium. It was so nice seeing you. I was hoping that I would find you at the marathon tent but never thought that we'd be sharing the same van! Also, glad to hear that your training has been going so well. Good luck to your next target race.

Thanks ! It was a pleasure meeting you and Miki. I was pleasantly surprised when I got home and checked the race results and saw that you were the overall women's winner ! Congratulations ! That was a very strong time on that difficult course.

Congrats on your 21:52 5K!Cant believe it only earned "bridesmaid"status!You Da Man!!