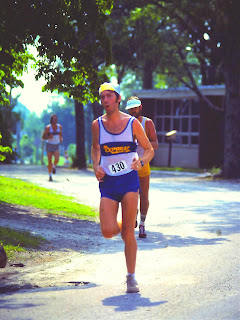 This Saturday I'll be heading over to the Cary Road Race for a 5k. As you probably know if you follow my running at all, I don't do many 5k's these days. In fact it was 2 years ago in March that I last raced in one. It's not necessarily that I don't like them. As a matter of fact I take a perverse pleasure in the pain of racing fast. It's just that they don't often fit into my schedule and I really prefer doing the longer stuff that I have focused on for the past 11 years now. My pr is from 1983 and I'm not even running in the same time zone as that now. The photo above is me on the way to setting that pr at the Zebulon Freedom run 5k on the 4th of July

Back around the first of the year as Amy and I were deep into the marathon training I took notice of how fast she was becoming doing the intervals and repeats as well as her overall strength. I knew that another one of her goals is to make a podium in a 5k. A near miss last October had gotten under her skin so I suggested that within 3 or 4 weeks after the marathon she should take advantage of her fitness and race a 5k. I told her she would probably be ready to race her fastest time since her HS XC days and would almost guarantee a podium finish. And I would also get a good test of how my speed is holding up. Getting harder and harder to do these days ! And if things go well every now and then I can give the road racing guys a run for their money and get an age group award also.

I had planned on about 3 workouts to focus on after allowing some recovery time but it didn;t quite happen. Amy went on a mini vacation and is taking a "warrior" challenge at Arrichion which means at least 3 circuit training sessions each week. With that intensity and  hard work she really didn't need to do the hard running I had planned but she will do fine.  s I was able to get in two of the panned workouts and was hitting interval times faster than I have in many many years so stay tuned and see what happens. I hear training and racing a 5k is great 100 miler training !

Good luck to you and Amy this weekend!! Let me know how y'all do!