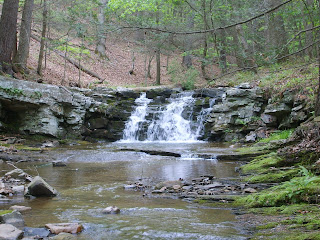 2011 was a very good year for my running and I look forward to many good times and miles with smiles with my friends. I enjoy training for the events probably more than the actual racing but as always I have quite a few fun things on the calender for the coming year.

Things get started early with the Weymouth Woods 100k in Southern Pines on the 14th. I'm looking forward to finally running this fairly new (3rd year) MTC event. It is a WS qualifier so my main goal is to run in under 14 hours but I'm in great shape and plan to go as fast as I can.

I'll be heading to the Central Piedmont of NC for The Pilot Mountain Payback Trail Marathon at Pilot Mountain State Park on Feb. 18th. This will be another first time event for me and I'm mainly looking for a fun day on the trails in a beautiful location.

Nothing planned but training after Pilot Mt. until the BIG EVENT of the year on the 31st. I'm going for the 100 mile PR at Umstead 100. Although I've been doing some other things, my eye has been on this one with practice loops nearly every week since May.

I will probably return to Promise Land 50K++ simply because I love the race. It's on the 28th so at least I'll have 4 weeks to recover from Umstead.

Nothing for sure yet. but I'll either be doing Doug's Wild Card 50k or possibly returning to WV for the Capon Valley 50k. It is a nice little race and very pretty. The picture above was taken there in 2007, my last visit to the race.

I didn't get into WS so I'll be back at the Bethel Hill Moonlight Boogie 50 miler again to challenge the heat, hills and humidity.

As much as I'd love to go back to Tahoe Rim, there will be no travel out West this year so I'm looking forward to returning to one of my favorite marathons at Grandfather Mountain. And no, no double this year.

No plans at this time other than suffering through another NC sweltering summer.

One thing that I've wanted to do ever since I heard about ultra's 34 years ago was to do a 24 hour run on the track. Well hopefully this will be the year. On Sept 1st I plan to do the Badgerland Striders 24 hour in Germantown Wisconsin.

I'm hoping to make a trip up to Northwestern Pennsylvania in late Oct for the Oil Creek 100 mile. About 10 years ago I rode a train with my son Jeremy right through the middle of the course for this one. A very pretty area and a race with a good reputation. They have to wait until the area HS football schedule is set in Feb because they use the local school to stage the event.

No Mt Masochist since I'll be doing the 100 just a week or two before so I'll probably go back to OBX or maybe something else. Or maybe nothing else until the Derby 50k after Thanksgiving. Plenty of time to think about it.

I usually don't race in December but if something interesting comes up I may and it depends on when we sing the Cantata.

Well, that's it. You may have noticed I'm not racing quite as frequently as I was a few years ago and I'll probably keep it that way and keep spending more time running as much as I can with the Angels. And it doesn't get better than that.
Posted by runjoey at 7:33 PM

Sound like you have a great year ahead of you! Look forward to seeing you out on the trails!

Thanks Joey..that pic made a great desktop picture...