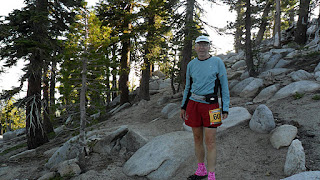 Just a few more days before we move into a new year so it's time to take a look back on what has been a great year in so many ways for me. I've been able to stay healthy again with no injuries, just the usual aches and pains to be expected for a middle age man out pushing the boundaries around on occasion.

This running life has brought me so many friends and experiences that I would have missed out on if I had never taken those first steps so many years ago. I have been fortunate to have met quite a few new people this year and strengthened many other friendships. The best part is that I continue to be able to train quite often with several of the amazing ladies that I call my Angels and I look forward to many more miles in the coming year with them.

Jan:
My main focus for the first part of the year was my training for the Boston Marathon. Part of my plan was to run several half-marathons in my buildup and the first one was very early in the year on 1-08 at Ocean Isle Beach. Met up with one of my training partners, Lisa and another Raleigh friend Laura who introduced us to John Williamson. I ran this one before in 2006 and like the course and the small race atmosphere but mother nature didn't cooperate. Despite near gale force winds, I felt good and ran a strong time but a few minutes off what I had hoped for. Considering the conditions I was pleased with the effort. 1:46:19

Another half marathon, this time a new one in Goldsboro and once again mother nature put a damper on the festivities. A cold wet damper with a hard cold rain for about half the race. I felt good but was disappointed with my 1:47:53 time on a suspect course. Splits were all over the place. The only redeeming factor was I did win my age group. Laura and John were there again so it was nice to have some familiar faces.

I decided to run a rare 5k for a change. Every now and the I like to run one just to see how the leg speed and training are going. This one was in Cary so there were several friends running including Lisa. This is a little hilly course so I was pretty happy with my 22:29 and once again I was 1st in my age group.

Two weeks later was the Tobacco Road Half-Marathon in Cary. I had run a Boston qualifier in the marathon here last year and was looking forward to a fast course. The weather finally cooperated with perfect conditions. I felt really good and finally ran below 1:45 with a 1:43:03. This was a big race so there were lots and lots of friends running and volunteering making this a very good day all around. Best of all were having several of my Angels in attendance.

Boston. If only I could have felt as good here as I did in March at Tobacco Road. I still have no idea why I had such a bad race other than some days you just don't have it. And I didn't right from the start. A very disappointing and uncomfortable 4:33:43 on a beautiful day that I should have easily run under 3:45. Oh well, it was still a wonderful trip having Karla, Frank, Lisa and Mike along. It was so special having Karla there after the way things turned out 5 years ago.Pretty amazing that we both qualified in the same race along with Lisa so that we could be here together. An emotional day but wonderful having her here healthy. A big part of me wanted to run it with her again. Wish now I had.

Five days later I made the trip up to the Blue Ridge of Virgina for the Promise land 50k++. This was awesome. My first time back in several years and it was like a reunion seeing so many of my ultra friends I've known since I began running them in 2002. Quite a few first timers from Raleigh area too. This was the official kick-off of my ultra training as I began my return to doing 100 milers again. Not much chance of a fast time with beat up legs from Boston so my plan was to just run with Jenn the Ultra Angel for as long as I could keep up with her. Fortunately we were able to stay together for the entire race and had a wonderful time although my slowest ever in 8:44.

Began the month with a new race, The New River Marathon north of Boone. My legs were pretty beat up after Boston/Promise Land two weeks earlier so I didn't know what to expect and my plan was really just to have fun and use it for a training run. I started out that way but felt really good so I decided to go hard and did great until the last few miles when the lingering fatigue caught up to me. I ended up very happy with a 4:18 on a tough but beautiful course.

Yes it was nice to return to one of my favorite events and in good condition. So once again I go shooting for a 50 mile pr with a slightly different strategy. Failed once again but at least I got a new course pr and had a wonderful time. Seems I knew half the people there which is awesome because they are a wonderful bunch. Got to run quite a few miles with Jenn. Lisa ran a great marathon and Ultramom Amy proved I was right by running an awesome first 50 miler finishing just 2 minutes or so behind me.

The real highlight of the year was the trip to Nevada for the Tahoe Rim 100. This would be my first 100 in 4 years and I picked a tough one but I love Lake Tahoe so I was so happy to be able to make the trip. It was so nice having Jenn along for company and meeting up with Karla and Frank. ( I had talked Karla into going to run the 50k). We were blessed with great weather at least for me and I had an amazing race experience. I had hoped to share most of the race with Jenn but it wasn't to be and I had to leave her behind at the 1st aid station. Jim Plant had his best performance ever and finished claiming his buckle. Overall, this was probably the hardest course I've run but I've never felt better in a 100 miler so I was very pleased with my 33:26:33 finish.

There were no races for me this year in August but I once again headed up the NCRC Umstead Series. Had a pretty good turn out for each of the runs as folks came out for the annual heat hills and humidity.Once again I held the Ultraman Joey awards for the runner that came closest to my time which I would run a couple of hours before everyone else. They were tough as usual but I was running them much better than last year.

In September I was finally able to fit the Iron Mountain 50 miler in Damascus VA into my schedule. A beautiful area and a great event but I made two mistakes. I underestimated the toughness of the course and I should have carried two bottles, especially with the brutal heat and humidity we had this year. DNF at 32 miles was the result. Still enjoyed the trip and visiting with some friends.

The last weekend of the month I was able to return to Hinson Lake 24 hour with plans for going after my 2006 total. Another hot sticky stifling day and I just didn't have it so I called it a day at 50 miles. Dozens of friends and a good weekend anyway.

Yay, finally some cooler weather ! On the 15th I made the short trip to Medoc Mountain State Park with Angels Jenn and Amy for the marathon. A gorgeous day and after an easy start the first three miles I was feeling good so I put it into race mode and had a very good day. Meltdown the last 2.5 miles but I was pleased with my 4:32 and 3rd place in my age group. The Original Trail Angel Laura Mac won the womens overall !

Started the month with another great reunion race at Mountain Masochist, the scene of my 1st 50 miler back in 2003. Made the trip up with Jenn and had a wonderful evening before the race seeing so many friends in my first trip back here in 3 years. I was feeling prepared and aiming for a course pr. Just missed by 6 minutes but it was a perfect day and I have never run stronger in the last part of an ultra before. Beyond happy with that.

Finished up the month with a return to one of my favorites, The Derby 50K. Another trip with Jenn and was happy to have Margherita along with us. Another near perfect day and I was of course going for the pr. Margo shared the 1st two of three laps with me and I was dead on pace for my goal but another meltdown and I had to coast it in nearly 20 minutes slower than last year. More great times visiting friends. Sound familiar?

No racing in the final month of the year. My plan was to just get in some good training, easy miles and easy pace. I stuck to the plan and got in some really great mileage. In fact with one more day to go I have 248.6 miles for the month and if all goes to plan I'll run 13 on the 31st which will give me 261.6 topping my best year ever in 34+ years of running.(previous best was 2006 back in 2006) As the week began I didn't think I'd be close and wasn't going to try and I even took Tuesday off from running but then on Wednesday with me needing 47 miles in the last 4 days I decided to go for it. I was feeling good and had the time so why not? And to make it even cooler,I have already topped my best year ever. I'm at 2488.3 and tomorrow's planned 13 will give me 2501.3 ( previous best was 2434 in 2010)
How cool is THAT ?!
Set all time best for month and yearly totals on the last day of the year at age 56!!

Thanks to all of you that take the time to read my stuff on here. As I said , it's been a wonderful year in so many ways. I am so Thankful to have the good health to pursue my running passion and have the support of wonderful family and friends.
Posted by runjoey at 7:56 PM