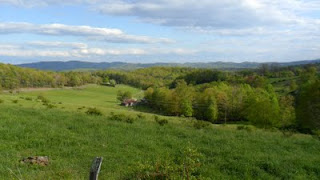 I wasn't really expecting too much out of myself for this one. After Boston and then Promise land 5 days later the body was feeling pretty beat up and I was still sore the week before this one. I was just hoping to get in a good workout, and not feel bad again using this race as training for my next couple of ultras. Lisa had gotten sick so she didn't make the trip and there was no Princess to run with either so I was planning on going out easy and then see how I felt. I hoped to run a decent pace and thought about at least 10mp, around a 4:20 would be great but expected a lot slower with the difficult hills coming late in the race.

I saw Angela Dukes from the NCRC just before the start and she was planning to try and run with me. I thought that would be nice to have the company so we lined up together along with Don Smythe. The start was actually on a bridge over the river. Due to some problems getting everyone parked the start was delayed for about 15 minutes. It was in the low 40's and so I wasn't too happy with that having just a singlet to keep me warm. I saw Doug Blackford just before we began.

Once we got underway I was letting Angela set the pace. I was feeling ok considering I did no warm-up. I was wishing I had on some gloves but otherwise was comfortable as we headed down the road parallel to the river. We passed the first mile in about 9:14, probably faster than I would average but comfortable pace at this point. 1/4 mile later we crossed over the river and began the first climb of the day. This hill would be about a mile long and gain around 300ft. It was steep in a few places and I walked just a bit to keep the heart rate down but most of it was runnable. I had pulled ahead of Angela and after taking a picture I waited for her but she quickly fell behind again so I just decided to go ahead and run how I felt. I looked back a couple of times but it was obvious we weren't going to be running the same pace today.

Even with the hill I had kept the pace below 10. That mile reminded me a lot of the early climbs at Grandfather Mt and it made me think the The Trail Angel should be here. After the climb we had a sweet downhill and back down to the riverside. By now my hands had finally warmed up , it was sunny ,a gorgeous day and I felt great. I was enjoying cruising along easily and caught up to a guy named Tim and we had a nice conversation over the next 1.5 miles. After mile 5 I noticed the pace had relaxed more than I wanted so I decided to kick it up a notch. I told Tim I may regret it later but I feel good and I'm going to see what happens.

There was one more climb of about 100ft to the next aid station just before mile 6 but after that the next 7 miles were pretty flat along the riverside and I was cruising along easily at about 8:35 to 8:40 pace enjoying the view and snapping some pictures along the way.

The course turned away from the river at mile 13 and began the tough part of the race. I was very happy to pass the half in 1:58 but I knew there was no way I could hold that pace over the next 4.5 miles. I had driven the course Friday night and I knew what was coming. The next half mile was a climb with one part quite steep gaining about another 100ft followed by half a mile of downhill.

Then the real fun began. Over the next 2.25 miles we would gain nearly 500ft as the road became gradually steeper. And just when you thought it couldn't get much steeper we turned onto a gravel road at the 16 mile mark and it became steeper than anything on Turkey Creek for you Umstead runners over the next 3/10ths mile. A little downhill and then right back up just as steep for another 3/10ths to the summit. It was a fantastic view (picture above story)but the best thing was knowing there were no more major hills. The next 2.7 miles we dropped back down into the valley but there were a couple of small uphills so it wasn't a total quad smasher like coming down at Promise Land.

I still felt good but was beginning to notice the energy level was dropping and my feet were getting tired. No surprise considering the past few weeks but I was still holding out hope that I could pick the pace back up on the flats again like before the climbs. Well reality set in quickly as my pace had dropped considerably at the same effort as before. No problem though as I was well ahead of the pace I had hoped for. All I had to do was relax and hold steady. Well that worked for a couple of miles but then I was just tired. Still moving along ok but I had to start taking some walk breaks which ticked me off a bit.

Finally reached the finish and was very very happy to exceed my goal and other than slowing more than I wanted the last 4 miles, I felt better than I could have hoped. Now why couldn't I have felt half this good at Boston? I think I'll stop tapering for races.

Here is a link to the pictures I took.

And here are the results.

On to the next one
Posted by runjoey at 8:58 PM

very nice Joey. I have no idea how you keep pumping theses races out! That elevation sounded sick! Good job iron man, as always.