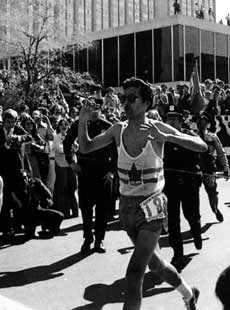 So whats so special about the Boston Marathon some of you may ask. Perhaps a legitimate question today with probably 500 marathons in the USA alone and many overseas. Every major city in the USA has one with many having more runners than Boston. And amongst all those marathons there are certainly more scenic routes, easier courses , harder courses and many are extremely well organized.

Lets look back to when I was just a lad born in 1955. As I was growing up I was only aware of the marathon when the Olympics would roll around and in those days coverage of the event may have just been a few moments. It wasn't really until Frank Shorter won in Munich in 1972 that most of America became aware of the marathon and that event is credited with the start of the first running boom. And then there was the Boston Marathon which I vaguely remember seeing a small report in the newspaper each year. It really wasn't until I saw an article with a photo of Jerome Drayton winning Boston in 1977 that spurred me to begin running.

By that year there were still just a couple of dozen marathons and 25,000 runners completed one in 1976. There will be more than that in just this one race this year alone. And of all those Marathons, Boston is the oldest having began in 1897 after the first of the modern day Olympics. By the 70's when I began running it was still one of the top competitive races in the world and with it's tough qualifying times it was the dream of nearly every serious runner to one day be able to compete.

Of course the standards to get in are much easier than they were back then but it still takes either a great gift from God or for most of us a whole lot of hard work and determination along with some luck to make it in.

So the history and tradition is a big part of the reason why it means so much to me to be able to go and race Boston this year. The fact that the race was a part of the reason I began running in the first place and that to participate you have to run a quality marathon makes it that more exciting that I will once again have a chance to participate

I would suggest to anyone with any interest in running to read as much as you can on the early history of the race and marathoning in general.

Wished I could join you there this year Joey! But I'm hopeful that I'll be there in 2012! Have a great time and go show Heartbreak Hill it ain't got nothing on Joey!

Bring on Part II! You are locked and loaded my friend. I enjoy watching you race.