I have seen the Promise Land (and it's beautiful ! ) 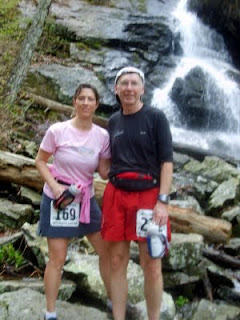 After 4 long years I was really looking forward to returning to the site of one of my favorite 50k mountain ultra's. I had raced here 4 times and in 2005 swept all but the first and last 2.6 miles segments on the gravel road as a training run. Due to nagging injuries and then concentrating on first doing an Ironman and then qualifying for Boston , I have been away from the trails for too long.

Now that Boston was behind me I was almost giddy with excitement as I met with the Ultra Angel Jenn for the ride up to the camp in the Blue Ridge Mts of Va. Rain put a damper on some of the Friday night socializing but it was still wonderful to see so many of my ultra buddies that I had not seen in 3 or 4 years in some cases. Many that I met and shared many miles in these very mountains. It was also good to see the excitement of some of my Triangle area friends that were getting ready to experience these gorgeous but challenging trails for the first time.

The rain continued through the night but I slept well in the tent. I wasn't too excited to get out in the morning at 4:30 am though but it wasn't raining too heavy and the 47F temperature wasn't bad so I climbed out and tried to stick to my normal routine to get ready for the start. Because of not training on the trails and just having run the Boston Marathon 5 days earlier I had no plans to race the course this year. I just wanted to get back and use this as a kick start for my training for the Tahoe Rim 100 miler in July and what better way than to do a difficult 34 miles in the mountains on tired legs?

With that in mind I had two goals for the day. #1 was to get to the finish and not suffer. #2 was to try and stay with Jenn for as long as possible while still concentrating on goal #1. Jenn was hoping to improve over her time from last year but her training has not been what she would like so she wasn't too confident.

The race started promptly with nearly 300 starters and I was happy to find that the rain stopped shortly afterwards. It is also dark for the first 45 minutes or so of the race so after a short distance running we fell into a powerwalk as the gravel road leading to aid station #1 gets progressively steeper and we don't want to burn up too much energy this early in the race.

I will spare you the blow by blow account of this race since I wasn't really racing. If you want more of a course description you can read my blog in the archives from April 2007. I also was carrying my camera and took nearly 30 minutes of video so you can see bits of most of the sections of the course. I'll be posting those on youtube soon if you haven't already seen them on facebook. Look for a post with the links soon.

Anyway in summary, after the first long climb I felt ok but was worrying that they may not hold up so well by the tougher climbs later in the day. I had no splits from my previous years so I had no idea how our pace was looking compared to years past. It didn't matter to me but I would have liked to have known so I could tell Jenn how things were going. We were having a splendid time and I was enjoying spending the day with my frequent training partner and dear friend.

By the time we reached the top of Apple Orchard Mountain the first time around 13 miles I was feeling fantastic and taking in all the sights that I am usually in too much of a hurry to appreciate. It's hard to sightsee and run here with all the rocks and roots along the trail. My energy level was steady thanks to an intake of Pringles, Cheez-its, M&M's and Hersheys chocolate.

In the latter mils of the race it was obvious that Jenn was not having a great day but a steady one. At this point I could have pushed and moved on ahead but I was in no hurry. She was getting blisters on both feet too which was causing her to slow down. After the final climb she told me I should go on ahead but I told her I was content to stay with her. A little later she sat down to tend to her blisters so I sat down to clean out my shoe which had a total blowout. Amazingly I had no problems with blisters even with so much debris going into my shoes the last 12 miles or so. Finally we got up and ran the rest of the way down the last 4.5 miles to the finish.

It was my slowest time ever but I thoroughly enjoyed spending the day on this gorgeous course with The Beautiful Ultra Angel. I never imagined I would feel as good as I did. My legs held up great and it wasn't until we had reached the final downhill on the gravel road that my quads were hurting. I sure wish I could have felt this good at Boston last weekend!!!

A fantastic weekend. So wonderful to see so many friends and hopefully I will be seeing many of you more often now as I once again turn my focus on being Ultraman again.

I don't know how this was possible post Boston but what a great adventure!. Rock on!