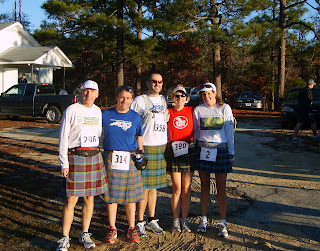 Well, I had planned to start out slow and see how I felt but not this slow. As Race Director Mark Long said go, I looked down to start my Garmin and realized I had not turned it on and acquired the satellites. Ok, no panic today. I just turned it on and began walking veerrrry slowly until they figured out where I was which took just over a minute. This of course had me well behind the other nearly 100 other entrants but I had 31 miles to make up that little bit of time.

The morning had begun very early for me as I awoke at 4am and then headed over to Cary to meet with Lisa and Amy to carpool to the race. We made good time and arrived at the Derby Community Center where I had nearly an hour to visit with many running friends from the MTC and also some NCRC friends that had made their way down to attempt their 1st Derby. Through Facebook we had agreed that this would be a kilt run so Lisa, Amy, Ken Hamilton ,Charles Akers and myself all lined up sporting our Sportkilts.

So, now I found myself at the back of the pack and began to slowly move my way up into the field of runners. I was just relaxing and snapped a few pictures along the way. After about two miles the pack had spread out and I caught up to Lisa around the 2 mile mark. We ran together from there chatting like we were on one of our normal Saturday long runs together until we reached aid station 1 just past mile 4 where we were greeted by Mrs.Doom, Rosemary and the Professor. I was happy to see that after the 1st mile I was running 9 minute miles and it felt very easy so I just grabbed a cup of gatorade and decided to pick it up a notch over the next section to see how I felt.

The next part of the loop is the easiest and my favorite including a sweet gradual downhill on Sycamore Lane and then the mostly flat dirt road section. It is a 5k to the next aid station and I averaged 8:55 and felt fantastic. Now I just had to see how it felt going up the long hill back up to Derby Road. That felt easy too and I was able to maintain pace without trying and completed the 1st loop averaging 8:59 for that 3.25 mile section. I dropped my waist pack off by my car and quickly headed out for loop two on a mission. The PR attempt was on.

By now the weather was perfect for running warming into the low 50's. I was pushing the pace just slightly on the downhills and then easing off just a little on the climbs. I didn't want to push too much because I still had a long 20 miles to go but I was really feeling good about things and smiling to myself to be running so well and having so much fun. I was back into AS 1 a little faster this lap averaging 8:54. In and out quickly and back onto Sycamore Lane, running strong and loving life, singing songs in my head that I've been practicing lately. Unfortunately I lollygagged a little once I hit the dirt road and ran it slower than the 1st lap but still my overall pace was below pr pace.

I covered the next section to finish lap two within 2 seconds of the time for the first lap and quickly ran on gaining confidence that I could get that pr today. Back into to AS 1 for the last time and only slightly slower than lap two. Another 1.2 miles down Sycamore Lane and I passed the marathon point in 3:57:17. Now if I could just hold on for another 5 miles. I had run that last section at 8:50 pace and was moving along well on the dirt road but then the slow fade began and by the time I hit AS 2 for the last time, I had slowed considerably and things weren't looking good.

I made one last push to try and pick the pace back up but after another 1/2 mile it was over. There would be no pr today. I had to began doing a run/walk up that last mile long hill and to add insult to injury I was passed by two runners that I had passed earlier, the first people to pass me all day. And then on the homestretch I was passed by two others. But even with the disappointment of losing it the last 3.5 miles, I am still very happy to have run so well considering how the last couple of races have gone. I ended up in 24th place out of 81 finishers and 2nd Grandmaster. Even if I had gotten the PR, I still would not have beaten 53 year old Mike Riggins from SC who ran a 4:23 ! I was first kilt !

Sadly, Lisa had a bad day and dropped after one loop so we waited together for Amy. I was so happy and proud to see her finishing her first ultra, just two weeks after her 2nd marathon at OBX. Husband and wife team Charles and Blanca Akers got their first ultra finishes together and Olga Kruger from NCRC also finished her first one. Overall a great day! Thanks to Mark and his volunteers !

Now I look forward to a few easy weeks and then into some serious marathon training for Boston.

Here are some photos from the race.
Posted by runjoey at 8:05 PM