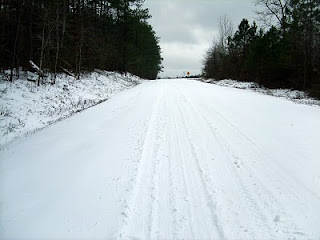 The year has gotten off to a great start so far. I've put in 226 miles for the month while staying healthy and pain-free. Things are going as planned with each workout having a purpose. After starting off with a good 5k and a week later setting a 50K pr, I've recovered well and back on track. Having fun is still top priority and there has been plenty of that with lots of running with my normal training partners a couple of times a week. Karla and I get on the track every Tuesday for some quality running with the emphasis now on some 800 meter yasso's to get ready for the marathon in March. Lisa usually joins us for our Saturday long runs and occasionally we get in a Thursday afternoon run together. And on a really good day Jenn gets a chance to run with me too.

We just had the first real snow in a year so I've had the weekend to relax at home and get caught up on some stuff around the house. And some running. Since it didn't look like we could get to the trail to run together on Saturday, Karla and I met Friday afternoon for a nice 20 miler on the American Tobacco Trail. Just as promised the snow began Friday night and by Saturday morning there was about 5 inches on the ground and it was sleeting. I waited until late afternoon before heading out for a little run in the snow. I took the camera along and here is a link to the pictures.

It was overcast, cold about 22F and very windy for that 4 miler. On Sunday the sun was out the wind had calmed to a little breeze and it warmed up to about 32F making for much better running conditions so I went for 6. I was lucky that so few cars have traveled out on the roads in my area that the roads were not slippery as I ran along on the crunchy snow.

Looking forward to a great February now!
Posted by runjoey at 7:31 PM