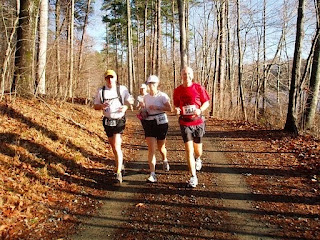 2007 when this picture was taken I called it the Not So Frosty 50. As you can see from the short sleeves, things were a bit warmer than usual in January.

These times seem so slow to me now but at the time I was very pleased with my improvement. I had to skip the race in 2006 as I was focusing on trying to get in a Boston qualifier in February. I had just lowered my 50K pr by a huge amount at Derby in 4:55:53 as my training had reached a new level. I really hated to miss it that year because it was the ultra debut of my dear and lovely friend Jenn now known as my Ultra Angel and I really wanted to run it with her.

In 2007 , the warm year I returned once again and this time shared the run with Jenn. It was a wonderful day despite Jenn having some lower leg pain issues.

I returned again for my 5th time in 2008, hoping to go for another pr which had since been lowered twice more at Derby and was now at 4:46:58. I made a good effort for 20 miles and was slightly ahead of pace but by 22 I was beginning to slow and nothing I did could turned it back around. After tripping at mile 26 I knew there was no point in pushing it anymore but I was still able to manage a course pr of 4:59:09.

I had to miss it again in 2009 due to my injuries and taking off the whole month of December. Part of the plan for my recovery and comeback was to take a complete year off from running ultra's and I did that, going back to Derby this past November which I ran with Karla.

But now it's time to go for it once again. At age 54 and after 32 years of running and going into the 8th year of running ultra's I will be running my 6th Frosty 50K and my 53rd ultra (not counting a few dnf's over 50 miles) I will be going once again after a PR ! The training is going great, I feel better than I have in years and feel confident I have a good shot at running faster than ever.

The only thing I don't like is that I can't run with the ladies. Jenn will be going with us, Karla has the bug and is ready to run her 2nd ultra and Lisa is making an attempt to cross over to the darkside for her ultra debut.

Stay tuned to see how Ultraman Joey and his Angels and Princess's perform. It's definitely going to be Frosty this year with the starting temperature forecast to be in the teens Brrrrrr.
.
Posted by runjoey at 8:16 PM

Have a great time!! Good luck out there. I can't wait to hear about it!!