Run For The Booty Half-Marathon 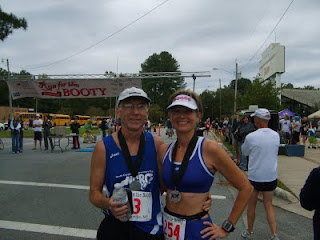 Early this year when Butch Robertson , the race director told me he was adding this race to his half-marathon series, I made immediate plans to add it to my racing schedule. Since my main priority this year after doing the Ironman was to begin to get back into Boston qualifying shape, this race fit perfectly into my plan to race the OBX Marathon in November. It is 4 weeks oout and with a fast course it would be a good test of my fitness.

Training has been going very well since my nagging injuries from last year are behind me now but despite getting in good mileage and running speedwork again I knew I would not be close to the same shape I was 4 years ago when I last qualified. So although I had to scale back on my predicted time I was still looking forward to a good race, a fun time and a reality check on my fitness.

Of course the Marathon Princess was part of the plan too since she is also trying for her BG at OBX. Unfortunately Frank has some little injury issue right now and chose not to run and Lisa, our frequent training partner is also out with an injury so Karla and I would make the trip alone this morning. With a start time of 7am that meant for an early wake-up and drive to Greenville.

We arrived about 6 and after picking up our packets and making last minute preparations it was time to warm-up. The weather was looking good with the temperature in the upper 50's and a little breeze but then it began to rain while we were running our warm-up mile. We all got lucky though and the rain stopped just before the start and would not come back although it stayed overcast the entire morning.

My legs were feeling good and the nagging after effects of last weeks mild chest cold seemed to finally be gone so I was confident of a good run. There were approximately 300 starters so as we began the race it didn't take long for things to spread out. I tried to keep the pace under control early and hit mile one in 7:50. Not too bad at only 10 seconds under my goal pace. Mile 2 was 8:00, dead-on pace and I was settled in now for the long run.

The course is mostly flat but there are several hills, none too steep but enough to let you know you aren't on level ground. One of the longest came just before mile 3 but I maintained effort and passed it in 8:06. As soon as we leveled out I picked it up again and the next several miles were pancake flat. The metronome had kicked in by now and I hit mile 4 in 7:53. I missed the 5 mile mark but from mile 4 to 6 took 15:58. Halfway and still feeling great and right on pace. Mile 7 was 7:57 and mile 8 with another long slight upgrade took 8:11. Once it flattened out I was right back on pace again in 7:57 for mile 9. By now I was starting to feel the pace and soon I had a painful side stitch that forced me to back off a little bit. I missed seeing mile 10 but passed 11 in 16:26 so I lost some time in those two miles. I was happy that the stitch did ease off but now as I was tiring and working harder to maintain pace, I began wheezing a little and coughing as the lingering efects of the cold kicked in. Even with that I still was able to hold on for an 8:11 12th mile and an 8:15 13th.

By now I was happy to see the finish line and ran strong to the end, satisfied to come within a minute of my pre-race goal. I immediately made my way to the car to get my camera to catch Karla's finish. I was hoping she would get her half-marathon pr today and didn't want to miss it. Soon she came into sight, missing her pr by about a minute but considering where she's coming from it was still amazing to come that close. And it would be good enough for 2nd place Master's Woman and 1st in the 50 and over age-group. I would be 5th in my age-group. Local Masters Superstar Tim Meigs from Raleigh was the overall winner of the race and another friend from Clayton, Brent George won his age-group.

We had a lot of fun and it was a great morning overall. The race went well and hopefully will be a regular feature on the local race calender.
Posted by runjoey at 8:32 PM