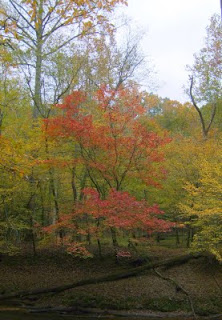 It wasn't until I was already hiking on the trail to take these pictures that I remembered that it was 30 years ago that I first ran on this very trail the first time. It was 1979 and I thought that I would like to do some trail running so I headed over to William B Umstead State Park and after looking at the map decided to run on the Company Mill Trail. That first run didn't actually turn out to well. after about a mile I lost the trail and finally gave up and ran back to my car. It was only later that I realized that I need to wade across Crabtree Creek to reach the 4 mile loop.

It wasn't long afterwards that I did return and do the whole trail. Back in those days there was not a bridge across the creek so you had to wade across the remains of the old dam and hope it was low water when you got there. At high water there can be some tricky rapids at that area. There were also no bridges over the many ditches and drainages along the trail so you had to climb in and out of them making for some slow running.

Of course these were my first runs on the trails as a runner but certainly not my first experience in the park. From the time I was 8 years old back in the early 60's I remember numerous trips to the park for picnics with my family, with church groups and with Cub and Boy Scouts and of course that included a lot of exploring on the trails and playing in the creeks.

Since I began running ultra's back in 2002 I have spent a lot more time training in the park, sometimes 4 or 5 days a week although not quite as much so the past year. It was enough for my friend Mike Walsh to refer to me as the Mayor of Umstead when I took over the NCRC's August Umstead Series. Of course there are many others that have and are running hundreds of miles through the park but I certainly know my way around.

Hope you enjoy the photos.
Posted by runjoey at 8:27 PM

Great photos! I love running on Company Mill. Throw in the Sycamore loop and you got about 8 miles of running heaven.