Time to give it another Tri 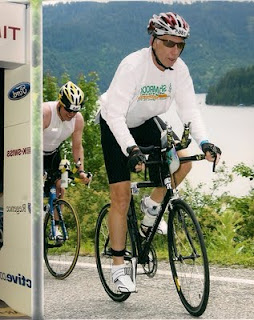 Yes, this weekend I will be heading up to Williamsburg VA area for the Patriot's Half-Ironman. I had signed up for this race last year but it was cancelled due to a tropical storm that went directly over the area the night before the race. As a result I entered the Duke Liver Center Half-Ironman the following weekend. I wasn't really in shape for either of them at the time and had a dnf in the heat and just did more harm to my already injured legs.

Since completing the Ironman at Couer D'Alene in June this year I'm afraid my already inadequate bike and swim training has fallen off even more. I've only been on the bike and in the pool about once a week since that time. The good news is that my running is going great since recovering from the race so hopefully that will help carry me to a decent finish. When I signed up for the race I had hopes of having a great race and going under 6 hours. The course is flat and should be a fast one, especially if there is no wind to contend with like it is so often at White Lake, another flat course.

Although I haven't ridden the bike that much, when I have ridden, I've felt stronger than earleir in the year, possibly still feeling some training effect from CDA. So, although I"m not quite as well prepared as I had originally planned, I will go and give it my best shot. No guts , no glory right ?
Posted by runjoey at 8:51 PM

Joey, Belated good luck. You probably have already started this morning and if you haven't you certainly will not read this. I will check back to see how things went. Rick