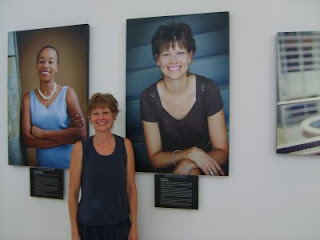 I had the pleasure of attending the dedication ceremony for the new NC Cancer Hospital of the UNC Lineberger Comprehensive Cancer Center on the campus of UNC-CH with the Marathon Princess this afternoon. Lots of dignitaries there including the Governor Bev Perdue, Senate Majority leader Tony Rand and House Speaker Joe Hackney with all the leaders of the UNC system and administration and physicians of the UNC system. As part of the new hospital, a gallery of photos and stories of cancer patients and survivors as well as caregivers was dedicated and located in the hall and lobby. This gallery is named the New Faces of Cancer Care. Karla was chosen to be represented as you can see in the photo above. I'm a bit biased but I think hers is the best picture of them all.

She has also been featured in a radio commercial that has been airing for the past week on several area radio stations. Hopefully this link will take you to a recording of it.

So how is she doing? Well, it's been almost 3 years now since her treatments ended and was declared cancer-free. As you know if you have followed this blog at all over the past few years that she and I have continued to run several marathons and other races together over the years but for a long time we were not able to train much together. Athough she was running her times had gotten much slower. I think she was getting frustrated that she could not run as fast as before the cancer but it takes a couple of years for the body to get over the effects of the treatments.

At the beginning of this year when I returned to running after my month of healing we decided to get serious again and started meeting for regular long runs on the weekends again like we had in 2005. And then in May we returned to the track to began a speedwork program. I'm happy to say that that she now seems to be as strong as ever and I expected her racing times this Fall to be back in pr range again. If all goes to plan we will both qualify for Boston and return and celebrate our friendship.
Posted by runjoey at 8:45 PM