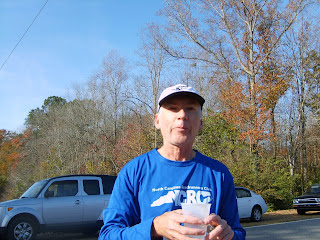 Well, one out of three is not too bad. In fact in baseball that would earn you a big contract.
But whatever the outcome you can't miss having a great time at this little gem of a race that Mark Long has given us down in rural NC. The race is low key but certainly not low quality with ample aid, friendly volunteers and a good course for a fair test of your endurance and ability.

It's a great little run and I had a lot of fun as usual. Just don't tell anybody. We like to keep it small and there is a limit.

Here are the photos
Posted by runjoey at 4:25 PM