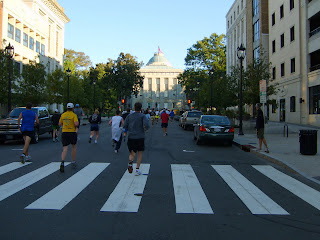 Here are the photos I took at the marathon yesterday.
It was great to see a marathon return to Raleigh and it couldn't have been a better day for it. The general consensus is that the RD and all the folks from Raleigh Running Outfitters and their volunteers did an excellent job with the race.

When it was announced last year, I had already decided that I would be returning to Richmond this year for a Boston Qualifying attempt. The course for City of Oaks, although a nice one is also a very hilly one and I knew there would be no way I could run a fast enough time so I would have to pass on it this year. I didn't even know if I would be able to see the race until this past Thursday when I found out I would not have to work Sunday. I planned then to attend the event and share the day with some of my best running friends. There would be numerous people from the NCRC and MTC running and I was looking forward to seeing as many as possible.
On Friday evening I attended a dinner with my good friends Margo and Bill, Jerry and Lynda and Frank and Karla and decided that race day I would jump into the race and run about 10 miles with Margo to get in a workout and take some photos along the way. Karla was going to run with Jerry and help him maintain a sane pace as he tries to return to form after not training much over the summer.
Sunday morning the sun arose with perfect temperatures for running. I arrived early and after visiting with several friends I made my way up the road to wait with Karla for the race to began. We didn't have to wait long before the runners started coming towards us. Two African runners had already separated themselves from the rest of the field by the first turn with a vast sea of colorfully dressed runners in pursuit, as they began the days journey. Unfortunately as the large mass of humanity swept by, I was unable to spot Margo in the crowd even with Karla's help. When we saw Jerry approaching I knew I had missed her so I began running with Karla and Jerry.
As we neared the 1 mile mark, an Amtrak train was passing by so I stopped to take a picture knowing I could easily catch back up with them. As I looked around I saw several other friends and started taking more pictures before taking off in pursuit. I was running on the outside of the course as much as possible so I would not interfere with the real racers and I carried my own water bottle, so as I approached the first water stop , I went over as far as possible to the other side of the road. I still hadn't spotted them although I had picked up the pace considerably. A mile later I realized Jerry must have gone to get water and I was way ahead of them. I considered waiting but then decided instead to pick up the pace even more and try to find Margo.
I was having a lot of fun passing through the field and spotting people I knew and stopping to take the occasional photo. I was running a lot faster than I had planned for the day but still no Margo. I thought maybe I would see Olga and run with her since she was aiming for 4 hours but as I arrived in downtown , I still hadn't seen either of them. I took a couple of shots of runners approaching the State Capitol Building as I neared the 5 mile mark. I then realized I had run the last 3 miles in 23 minutes even with the stopping several times and walking backwards looking for people. I decided then to shut it down and back off the pace and just wait to let some of my other friends catch up with me. This was suppose to be an easy workout anyway.
I stopped to speak to the Squires for a minute and then began again at a slower pace. About that time Matthew Greene from MTC caught me so we ran together for the next two miles and then at Cameron Village I sent him on his way and waited again. My overall pace was still way too fast. I took a shot of Thomas Asta and then took off again. I spotted the Dummars and Emily behind me so I joined in with them for the next two miles. I told them I was going to drop back some more and hopefully Jerry and Karla would be along soon, and when I looked back they were only about 15 seconds back with Mark Long and Pam Carpenter right behind them. What a great day!
I was surprised but happy to see that Jerry was having a good run and enjoying himself as we passed the 9 mile mark. He continued strong and began pulling away from us at a pace that Karla didn't want to try and match with her marathon coming up next weekend so from that point on it was back to a normal training run with my regular training partner, The Marathon Princess. After mile 11 we decided to run down the hill to near the 12 mile mark to visit with Jenn and call it a day with about 11.5 miles of actual running. After talking to Jenn for a few minutes we walked back up the hill to watch the finishers.

The day was a lot of fun and I got in a good workout. I would love to run the race sometime but unfortunately for me it presents a scheduling conflict that will not allow it next year. It falls on the same weekend as one of my favorite ultras, the Mountain Masochist and I will not be missing it again next year.
Posted by runjoey at 7:31 AM