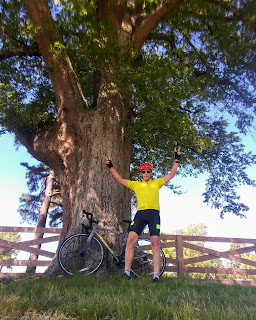 It's been awhile since I've written. Having the marathon cancelled in the last days after posting  my weekly training took away my incentive to write anything. But I was asked to write an article for the NC Roadrunners newsletter so here is what I've been up to.

Like many of you, I was preparing to race the Tobacco Road Marathon in mid March and had been detailing my training as I would be attempting to qualify for the Boston Marathon for the 1st time since 2016 with blog post and posting to social media.  I had been watching as many events begin cancelling in the weeks leading up to the race but was hoping that the race may go on before the big shutdown. Well, that didn't happen and although I searched I couldn't find any other races as one by one like dominoes falling, all events around the country were cancelled. All dressed up and no place to go. Sigh.

Fortunately, one thing I have learned after many years in attendance at the school of hard knocks is that worrying over things that I have no control over is a big waste of time and energy. Time to move on. But what would that mean? Move on to where? Anyone that knows anything about me can tell that I am driven by making big audacious goals, some very long term, some short term and then putting a plan into action to achieve those goals. That of course under the circumstances is just an exercise in frustration as there is no way to look into the uncertain future to find any thing to target.

So, what to do in the meantime?  Virtual runs have zero appeal to me so that was never an option. What I did decide to do was just have fun and just do workouts as much as I wanted,when I wanted.  A friend had began biking and so I decided after 11 years since I last rode while competing in triathlons that I would dust off and lube theold bike and take it out for a spin. I had so much fun that I was soon shopping for a new bike and splitting half my training time riding myself back into decent shape. And through it all I've continued to do my core workouts and yoga at least every other day. No one knows when racing can resume and as I write this more events for July and August are cancelling but until I can once again compete I'll keep in top shape and be ready to go. I still have some big dreams so stay tuned sports fans.
Posted by runjoey at 8:17 PM