Return to the Virginia 10 Miler.

Will this be the year I finally make a podium spot? Well, let's look back at a little history of my favorite road race.

The VA Miler is one of the premier races in the country and begun in 1974. In it's long history it has seen a virtual who's who of elite running including many Olympians like Lasse Viren, Frank Shorter, Rod Dixon and Grete Waitz.

I first ran it in 1978, my first year of racing. My brother and I went under trained and not prepared for this very tough, hilly course.In those early years it was earlier in Sept and had a 10 am start time so it got up to 88F and we suffered through it. Despite the difficulty we signed up for the next year and so began my 15 year streak until 1992. The next several years after my divorce my running suffered as I tried balancing work and raising two boys.

As the kids got older and I began running more, I finally returned in 1999 through 2002. After that I became an ultra runner and it would not be until 2016 that I would come back once again.

The race had always been very competitive and after I turned 60 and having some success at age group racing I was thinking how cool would it would be to actually make the podium in my all time favorite race. Early results in 2016 showed that I had finished 3rd and I was elated as I made a premature FB post but later after the results were revised I had dropped to 6th ! Grrrrr.

I was unable to return in 2017 but came back last year and moved up to 4th. I made a vow that day I would return and give it my best shot at running my fastest time since 1992 and get that podium spot. Unfortunately I'm not in shape to do that. No ones fault but mine. I just wasn't prioritizing the running like I needed until mid July. Things are going well but I could use another 4 weeks of focused training. As it is I can only go and give it my best shot and see what happens. It's going to be a hot one so fast isn't an option but at least my competitors have to race in the same conditions so I'm not ruling out placing just yet.

Below I am listing all my previous results. To give you an idea just how tough this course is, my record here of 1:08:15 is nearly 4 minutes slower than my 10 mile pr set a year earlier ! 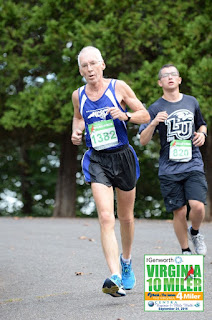