I had originally signed up for this race just for fun and training. I had expected to be recovering from a marathon but I ended up not running that. I also expected to see my friend Stephanie and  maybe run some miles with her but she got sick and couldn't make the trip. I was still fighting off a cold but on race morning my lungs were feeling better than they had for a couple of weeks so I decided to go ahead and race it hard. 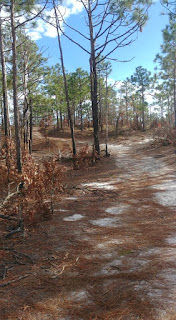 Race morning turned out to be warm and humid but at least the rain had stopped. It was about 62F at the start. I went for my usual warm up mile and ran into MTC friends Mark and Irene and talked to them a few minutes. They had both raced last year and told me to be prepared for sand. I had run on some trails in the park but it was over 20 years ago and I had envisioned dirt and hard packed sand with some pine needles and a few roots. How bad could it be?

I finished my warm up and lined up with about 300 others. I had no idea if or how many other seniors were racing but I was hoping to make the podium. We started off on the park road in front of the visitors center and then turned onto a paved bike path along the border of the park. This allowed for a fast start and a chance to spread out a bit before hitting the trails. After about .8 mile we turned into the woods and it was just how I had remembered it.   I went through mile 1 in 8:08. Cool. That was better than expected so just maybe I could make my goal of sub 1:50:00 today.

All was well and I was having fun and making my way around a few people and then we hit the first of the deep sand along the waterfront. Good thing it wasn't a long section but I was already thinking this could be tougher than I had planned on. Mile 2 was about 8:37. The next mile was mostly some fun stuff and I was right behind a couple of locals that were familiar with the course and they were talking about Sugarloaf and how it was going to be hard going over it twice. Hmmmm.

So then it was there in front of me. Sugarloaf is an ancient sand dune mostly covered in forest now but still pretty deep sand. By Umstead standards not a long or steep hill but definitely a challenge. The path up was wide and fairly hard packed but the race took us down off the main path and it was very narrow, twisting sandy and eroded. The people in front of me walked the while way down and there was no way to pass. In reality I"m not sure I could have run it much faster so I stayed patient and it wasn't that long anyway.  Mile 3 was about 9:04 and any thoughts of sub 1:50 were about out of the equation now.


Mile 4 was a bit of the more enjoyable stuff with short sections of deeper sand but overall not too bad. Then we hit mile 4 and a water stop. Then it turned ugly. We left the trail and went cross country over and through sand pit hell for about the next half mile. It was deep, much like trying to run on the beach at high tide, just sucking the life out of the legs as I tried to keeping running a somewhat normal gait. Somehow I still managed a 9:37 but now my plan was to just run hard but not try and push it not knowing how much more sand would be encountered.

Around mile 6 we came out onto the bike path and soon were back near the start area. I did pick up the pace and ran what would be my last sub 9 of the day. The next half followed the first mile and a half but then we veered off in a another direction and crossed over onto a  couple of trails we didn't run on in the first lap. These trails were nice most of the time but every few minutes there would be some deeper sand but at least we didn't have to go through the sand pit again. By now I was hovering around a 9:20 pace but I was still feeling pretty good and confident that I wouldn't blow up.

Around mile 9 we went up the only other significantly sized hill and it was fairly steep and I walked about 15 seconds near the top. . After that we soon merge back onto the trail we started on but in the opposite direction. And so eventually we came back to Sugarloaf but going up the backside gnarly trail. I walked most of it too but once I hit the summit and about 2 miles to go I just started hammering. Well, as hard as I could under the conditions. The humidity was getting to me and it had warmed up to about 70F, not typical late December weather. We did a short out and back spur along the river and it had a lot of deep sand so mile 11 was my slowest of the day in 10:21.


My new goal had been to break 2 hours and trying to do the mental math showed that was becoming doubtful but I pressed on. With a mile to go I still had never noticed anyone that looked my age so as I came off the trail for the last push to the finish I still had no idea if I would place.  I came to the line quicker than expected finishing in 2:00:06. Good enough. I was quite happy with it because after all it was a trail race and more of a challenge than I bargained for. Most importantly was that I felt good and was pleased with the effort I put into it.

After resting a few minutes, I walked back to my cabin to grab my phone to check for the results. Boom. 1st pace 60 and over out of just 6 of us and I won by over 7 minutes. I'll take that. 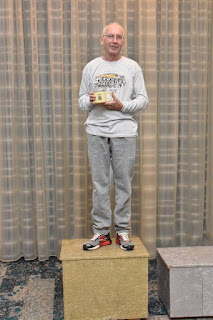 I doubt I run this one again as there are just so many other things that I want to do but if you like trails and fun it's worth a try. The organizers did a great job with the event. Everything went smoothly. Plenty of volunteers and despite the many turns and different trails the course was very well marked and for a trail race there were plenty of water stops. The race schwag was pretty cool too.
Posted by runjoey at 7:58 PM