City Of Oaks Half Marathon. It's coming along

After winning the 10k for Seniors at this event last year I decided that I would try making the podium in the half my goal for this year.  Of course , I was expecting I would be in better shape but as you know I'm not quite where I wanted to be going into this.  This is a tough course with hills after hills and making my fantasy goal of sub 150 was looking like a fantasy for sure. A year ago I would have been thinking 1:44 but that was not even a fantasy at this point. Two weeks ago I came close to the 1:50 on a warm humid morning until slowing considerably the last 5k.

One thing I had going for me on race morning was near perfect weather conditions. Mid 40's warming to mid 50's is about ideal for this distance. I didn't do much of a warm up and then arrived later to the start than I should and found myself stuck in a tight pack with at least 1,000 runners in front of me. Chip timing but it was going to take a while to work my way to clear running.

As we began moving forward I just stay patient , picking my spots to pass as an opening presented itself. the 1st mile was very tight and slow but I never saw the marker and as usual I was not wearing my garmin. By the time I made the turn onto the wide Western Blvd stretch I fond more room and began to make up a little time. But then I caught up to the  large 2:00 pace group and realized they were not going to go any faster. I finally made a move to go over to the far outside lane and made my way around and after that It was clear sailing.

I hit mile 2 in 17:00 which was the overall pace I ran two weeks ago. not bad considering I had to work my way through the crowd. I was feeling good and relaxed and handling the hills ok so far,
Shortly after mile 3  in 8:19 as we approached the Capital, the 10k runners split off and a noticeable thinning of the crowd. Mile 4 is probably the fastest on the course but I missed that mark. Mile 5 showed 16:16 for those last two miles which put me right on the 8:23 pace I would need for the sub 1:50. I was still feeling good and my confidence was growing that just maybe I could do it.

It was right about here that I noticed a grey hair just ahead that I was positive was in my age group so I had something to focus on. The next few miles were just relentlessly hilly so I couldn't push too hard but still feeling good. Mile 6 was 8:14 and 7 was 8:09 so I was staying below goal pace and building a small cushion. Around mile 8 it looked like I was closing the gap on my competitor and maybe he was slowing down a bit?   That was a tough one and it took 8:23. No problem but I didn't want to slow down just yet.

Over the next few miles, the grey hair was looking stronger on the hills and I was making back a bit on the flats but overall he was gradually pulling away. Mile 9 and 10 were 8:18, and 8:20 giving me just a little more cushion. best of all I was pretty sure there was not going to be a meltdown in the last 5k this time. The only downside was I was not going to catch my competition as the gap had grown too wide by mile 11 in 8:27.

The final two miles were back on Hillsborough street and I just dug in trying to maintain pace, knowing I had that sub 1:50 in the bag. The questions were by how much and how many other seniors were up ahead. Mile 13 was 8:23 and then the last .1 to a strong finish of 1:49:16 Woohoooo ! I was thrilled with that. Now  to see the standings. I spotted the guy I chased and we talked for a few minutes. I was happy to find he was only 57 ! We had a good laugh about that and then I headed over to the timing tent. Yay ! I got third ! 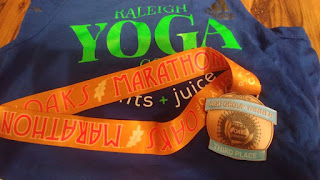 Now, I just have to keep building on this success and by Spring I should be right where I want to be.
Hmm, wonder if I should go for a podium in the full next year?
Stay Tuned sports fans.
Posted by runjoey at 8:55 PM