This is a story of how not to run a marathon that you are nowhere near trained for competing. As you know from reading my preview( you have read it haven't you?) my plan was to just go and do a run/ walk from the beginning to help with the inevitable meltdown of the second half of the race but  as I rode the bus to the start things changed. Being a hard headed competitor and at times not too bright and too optimistic for my own good I just decided to go for the BQ and suffer whatever the consequences may be. 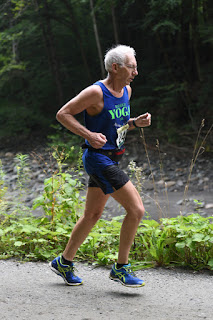 It was a beautiful morning, in the upper 50's as we waited for the start but by race time it was warming and there was no escape from the humid conditions at home as we were about 99% here in Vermont. With the RD blowing a vuvuzela, we were off into the forest and heading downhill hill onto a dirt road. I really wasn't having to push and indeed was trying to hold back as the gravity assist made my 8:45 BQ pace seem easy.

After a couple of miles we came out onto a paved road and joined alongside the Green River which would be our companion for the next 17 to 18 miles. By now I was settled in and feeling good. A young farmer from the area pulled up beside me and started a conversation. It was his first marathon and I enjoyed talking with him for the next few miles before I told him I had to back off the pace as we had gradually been picking up speed. Around mile 5 we were back on the dirt and I was still cruising along at about 8:35 to 8:40 pace.

Although the course was a net downhill of 1,400 feet, there was still 650 feet of climbing so it was not an "easy" course by any means and we hit the first significant hill on an out and back spur around mile 7. By mile 8 we were back along the river and I was just trying to enjoy the views. With only 350 starters the field was quite spread out with me in about 120th position.

By mile 10 I was already feeling the effects and drenched from the high humidity and I was already thinking it was time to just shut it down but decided to try and maintain at least until the half. At mile 11 we ran across a covered bridge built in 1830 with views of a log crib dam from 1810 ! One of the highlights of the course and a few cheering spectators. I tried to look good for the camera but I was already slowing down. 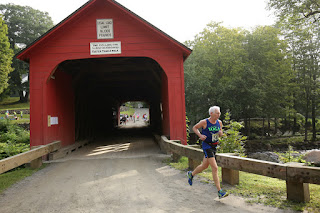 A couple of miles later and I reached the half in about 1:56, still below BQ pace but the last 3 miles had been slowing into the 9:10-9:15 range  so I gave in to reality and began to walk. Maybe if I could maintain 12 minute mile pace with a run/walk I could still get in around 4:30 without feeling too bad. And that worked ok for a few miles but then we hit one of the nasty long hills at mile 17 and things definitely were going downhill pace wise, physically and mentally. Now I was just ready for this thing to be over. I was hot, tired, soaked from sweat and the prospect of  mostly walking another 9 miles was not very appealing.

But I trudged on as each mile slowly passed by. Mile 20 to 21 was nearly all uphill and   At the top we emerged from the woods into an aid station and a couple of dozen spectators.  Several said I was looking good to which I replied. thanks but I wasn't really feeling too good.  they insisted I looked a lot better than most that had recently passed by. 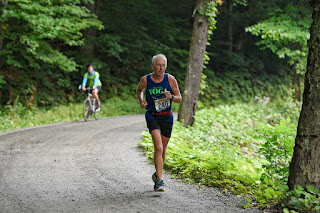 The last 5 miles were pretty flat and or slightly downgrade but also in the sun and some traffic. My biggest problem was keeping my attitude from going completely South ! Finally the last turn onto the College Campus. Time was of no concern  but the finish line was just ahead. 4:50:10 and done.

So, I got the butt whipping I knew was coming but I got it done and hopefully things will soon cool off at home and I can actually get in some proper training for the upcoming Fall races.

As for this one, I give it 5 stars and two thumbs up. For a small first time charity event they had everything worked out perfectly. The venue and course were great, the shuttles went without a hitch. Drop bag service, aid stations, schwag and post race food  were all excellent. Just don't look at the net downhill and expect easy !
Posted by runjoey at 2:28 PM