I was feeling excited about returning to this race after 19 years ! Of course the excitement was tempered a bit knowing I wasn't quite 100% ready  but at least I'm healthy. Cold rain was also kind of putting a damper on my enthusiasm as I drove the 2.5 hours to Salisbury. But yeah, I was excited !

Lets' back up just a little and give you a little history. This race is held on the campus of Catawba College in Salisbury NC. I actually ran a 10k that started here in my first year of racing in 1978 that shared part of the same course. That race was in June , a week after the first Great Raleigh Road Race so as you can imagine I learned a lesson about racing back to back weekends in heat. That one was a bit disappointing.

My next race here was at the Winter Flight in 1986. It was a 10 miler then and I ran quite well in the cold with what would be my 3rd fastest 10 miler. I returned again in 1987 and it was then an 8k and has been every year since. I did do some training runs on the course a couple of times in the 90's when I was commuting to Charlotte a lot and so I was very familiar with the course and I remembered it in a lot more detail than I expected I would  in this years race.

Ok, back to the present. It was pouring rain when I arrived but fortunately the race has access to the college gymnasium, a warm and dry place with  bathrooms. I was having a hard time getting pumped up about going outside and beginning my warm up routine but I knew I had to if I was going to race well and after all that''s why I was here ! So out I went 30 minutes before the gun to do a warm up mile on the track in the stadium where the finish line is located. I was happy that the rain had slacked off to just a steady light rain and at 50F wasn't too bad.

A few strides and it was time to start. I spotted my main competition ahead and as I expected at the beginning he took off at a pace I had no intention of trying to match. I was just hoping perhaps to be racing for 2nd or 3rd today. The course began with  an uphill, gradual then getting steep but not too long before dropping down to the other side and then flattening out a bit on the main road as we exited the campus, I took it easy going up, pushed slightly going down and then tried to settle in to what I hoped would be my average pace. (goal was 7:30). Nailed the first one 7:25.

I was actually hoping it would have been a bit faster because I knew this was one of the easiest miles on the course. We were already climbing and up ahead it was getting steeper hitting 5 to 7% at the 1.5 mile point before turning into a residential area for a short time. It was flat through here and for the first time I noticed a man going by me that looked like competition so I was hoping to keep him close. As we ran downhill to the 2 mile mark I passed him back. This would remain the pattern for the rest of the race. He was stronger on the climbs and I would pass him back on the flats and downhills. I was hoping I had maintained pace but that first half of mile 2 had slowed me more than I wanted for a 7:48 2nd mile. At least I was feeling good.

Going down to the 2 mile point I had passed a tiny young girl that I would later learn was 11 years old and in her longest race ever. Soon after the climb in mile 3 began she passed me back so now the three of us were going to play leap frog to the end. It added a little fun to the race having these two racing with me but I had to just go hard. no matter what. Mile 3 is mostly uphill and the high point of the course is just beyond the 3 mile mark which I passed in 8:04. Sigh. I really didn't want to see an 8 but at least I was still feeling good and doing my best. It just wasn't going to be at my goal pace today.

Of course they both passed me going up but mile 4 was going to be mostly flat and then a gradual downhill so I just set my sights on staying focused and hope to slowly reel them in. I passed the girl at about 3.5 but at mile 4 I still had a gap to make up on the old guy. Mile 4 was a 7:27 so at least I didn't lose any more off the goal pace.

Soon after mile 4 the course drops down to cross a bridge over a creek and I made the push to pass the guy but now I had a steep nearly qtr mile climb to try and hold him off. I dug in and was giving it all I could and making the death noises but about 2/3rds of the way up he went by and there was nothing left to give. Just before the top there is a right turn back onto campus and the hill gets almost ridiculous steep for about 20yards and I almost walked I was so spent from trying to hold him off but I didn't give in to those thoughts.

I recovered a bit rather quickly and for a few moments I thought I may be able to reel him in again. About that time the girl. , OK, her name is Emberleigh went flying by me. It was about 1/4 mile until we entered the stadium and I closed the gap just a bit but once we got onto the track I couldn't get any closer. Emberleigh  passed him with 150 yards to go !

My last mile was 7:30, not bad considering that steep hill for a final time of 38:25. I walked over to the guy to congratulate him and he was happy like me to have a good race. Turns out he was just 56 so not in my division.  but turns out I was still 3rd. 2nd place ran  about the time I had hoped for  but 1st ran under 35 minutes ! Dude is for real ! 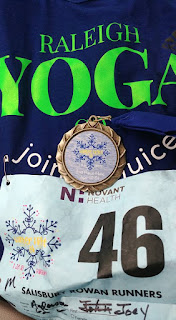 I can highly recommend this race if you like a well produced event with a small town old school feel to it. Speaking of old school, they don't use chip timing. Nope , there was a person with a stop watch calling out splits at each mile mark, a clock at the finish and as you crossed the line you were handed a 3x5 index card with your overall finishing place. How cool is that. And yet they still had the awards ceremony on time. Great job Salisbury Rowan Runners !

So, going in I knew that my training had been lacking for most of the 6 weeks prior but I'm on an upswing. Barring any unseen problems I know I can get back to late Autumn racing shape in a few weeks and under the conditions this was not a bad race at all for me. It is disappointing  that my lead in the Running Journal Grand Prix is now gone but I only trail 1st by 10 points with 3 more races to go. I was only going to go 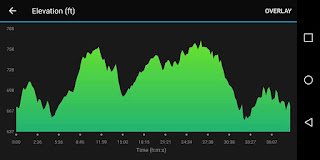 to 2 of those but after de-briefing with the #1 fan it was an easy decision to enter the 3rd one in Alabama on March 3rd. So stay tuned for the training leading up to that one.
Posted by runjoey at 8:54 PM