No, actually I had never been to Alabama before so I was looking forward to visiting my 43rd State. The real reason I was racing here was because it was the 3rd race in the Running Journal Grand Prix Series which is my main focus until next May. I wasn't aware until a week before the race that it was also the Alabama RRCA Championship race for the Half Marathon so now I had a bit more of an incentive. This would be the biggest race of the series so far with about 900 entrants and I expected there would be some tough competition.

I had limited time on this trip so I was happy that they had packet pickup on race morning at the start/finish which was located at Regions Field, the ball park for the Birmingham Barons AA team. It was a chilly 41 with about 13 mph wind so after I got my bib I sat in the car staying warm until about 30 minutes before the start when I began my normal warm up routine. There is a railroad heritage park adjacent to the ball park that is flat and beside it is a very busy railroad mainline so it was a good place to warmup. 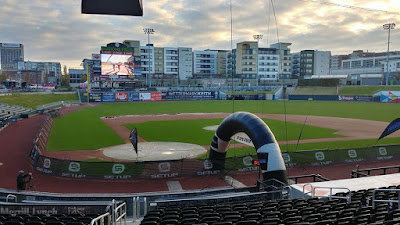 As I lined up near the front I was scoping out the competition and noticed a man next to me that looked very fast wearing racing flats and I glanced at his bib and thought I saw age 62, Hmmm. A few other white haired guys around.  Maybe I can make the podium.

They fired a mini cannon  to start the race and I almost jumped out of my shoes it was so loud ! And then we were off headed to downtown. Within a quarter mile we hit the first hill. Although the city is in a valley it is mostly rolling terrain but some nice fairly flat stretches too. My goal was to try and run about 7:45 to 7:50 pace  and mile one was 7:54 and I felt good. And that fast looking guy? Gone ! Already out of sight so I knew there was no win in the cards for me today.

Mile 2 and 3 were uneventful as the field began to stretch out a bit over some gentle rollers and then I was passed by a white haired older looking guy. Hmmm. Now I'm racing for 2nd or maybe 3rd. I just kept my eye on him and at the mile 4 water stop I passed him back and hoped that was that. But soon after he pulled by me again. At mile 5 I was about on pace and it was still a long way to go so I just decided to try and keep him in sight and not push too much yet, I knew the worst of the hills were in the last half of the race and I had 8 miles to try to reel him in.

I was cruising along comfortably through miles 6 and 7 and the gap between us was holding at 8 to 10 seconds and then we came to the beginning of the two longest hills.  The one in mile 8 wasn't too steep but was about half a mile long and I ran my first mile over 8 pace in 8:10 so not too bad. He seemed a little stronger but on the backside I was making good time. We had a u turn just before mile 9 and I had closed the gap to within 6  seconds again. They really must love their baseball around here as the turn was at an old ball park. and we had passed another larger one that I believe is for UABirmingham.

So I'm still feeling pretty good and pick the pace back up on that 9th mile in 7:46 and hopeful I can still run under 1:44 but then we hit that backside of that hill and it was longer and steeper. I had nothing going up and watched as my opponent slowly pulled away as I slowed down for an 8:29 10th mile. I tried to hammer as hard as I could going down and onto the flat and was happy to hit it in 7:46 but I wasn't making up any ground. I was feeling the wind, my hands were getting cold again as the temperature was still in the low 40's  and I was getting tired.

Two miles to go and I was trying to push but I was slowing and nothing I could do to change things. It was a very slight upgrade but no more hills so I just put my head down and ran. Finally I could see the stadium and one more mile to go and by now the death noises were coming. As we circled around the ball park lots of spectators were giving me weird looks and a few were encouraging as I was now intent on my realistic goal of running under 1:45. Not exactly the outcome I came for with it looking like a 3rd place but that would give me enough points to guarantee I would remain in first in the standings. 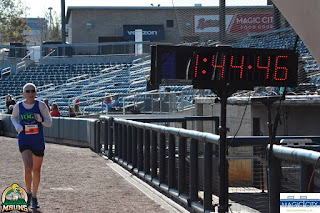 Finally it was time to run through the tunnel and enter the stadium along the warning track and circle around to the finish at home plate.1:44:47. I'll take that. As soon as I got my medal and water I walked over to the guy that I was sure was 2nd place to congratulate him. He asked me how old I was and when I told him 61 he was happy that he stayed ahead of me because he was just 59 ! Yay ! Maybe I got 2nd after all. Then I headed over to the results tent and let out a woohoo  when I saw I was 1st Senior Grandmaster. Turns out the guy at the start was only 52 not 62 ! 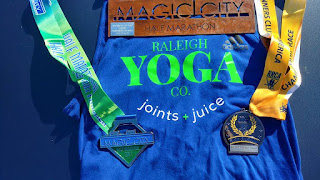 How cool is that !? 1st Place out of 25 seniors and Alabama State Champion ! 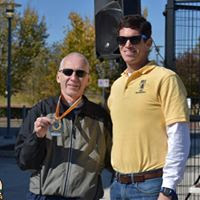 I can highly recommend this race for anyone looking for a good half marathon in Alabama. Very well organized, nice medals, excellent post race party and food and they have food trucks and entertainment for the kids 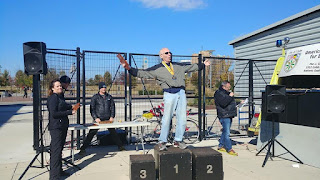 Stay Tuned for more exciting action to come.
Posted by runjoey at 8:24 PM