Boom ! Nailed it ! OBX Half Marathon 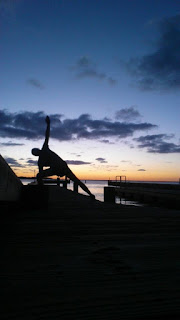 I was trying to come up with a title for the race report and those three words summed it up as well as any.  At the end of last year as I was planning my racing schedule for the coming year I had already made up my mind that this would be the goal race for the Fall and nearly all of the 2nd half of the year was geared toward being in top shape for this one.

The race is along the beautiful Outer Banks and was started in 2006 to bring tourist into the area during the off season. I was there for that first race  running the full marathon and returned on 6 other occasions. I couldn't go to the 10th anniversary for personal reasons but made up my mind I was going back but do the half for a change. After all, this was the year of running shorter distances anyway.

In my mind I had set a goal of running 1:40 and hoping that would be enough to get me on the podium and as I like to put my goals out there, I made that prediciton in my January looking ahead blogpost.  But I knew it wouldn't be easy. Last Fall I was running in the 1:44 range but felt I had faster in me if things went well.

But, things sure didn't start off well this year as I missed almost all of January with a recurrence of my nagging hamstring/hip/glute injury. I slowly returned and was happy to see  a quick recovery but in March at Myrtle Beach I woke up with a fever of 101.2 and an upper respiratory infection. I ran like an idiot anyway  and somehow ran 1:50 and then felt like I had a truck parked on my chest.

Two weeks later after antibiotics and pracically no running in between I ran  a 1:47 at Wrightsville Beach. Finally after that everything began to fall into place. My injuries were finally gone in part thanks to beginning yoga at the first of the year and I was finally able to train with confidence. But I had my work cut out for me if I was going to drop my time that much. I had some pretty amazing things happen after that and achieved every goal I had set for myself over the Summer and early Fall.

After having a great race at the NCRC event, ATT 10 miler in late October, three weeks before OBX, I felt in my heart that I could do what  I  had set in motion  last Winter. I messaged my training partner Laura and told her 1:40. It's going to happen.

So finally the weekend of the race arrived and I had a plan.  The course is about pancake flat other than going over the Baum Bridge over the sound into Manteo at mile 10.   I just needed to run smart and stay within a few seconds of goal pace so I could get to the bridge feeling strong and once  I hit the top then throw myself off the bridge ! Ha, thats a joke from one of our training runs. Not literally jump off but use the downside to start the push to the finish with a strong fast last 5k.

The weather on Sunday morning was near perfect. 44f at the start and only reaching a high of 50F and only a slight wind of 6-7 mph, mostly a tailwind ! Everything was falling right into place. I did the usual warmup routine and then lined up near the front, eager to be underway.

At the gun I fell into a comfortable pace ignoring those around me as always and hoping my sense of pace was strong today. Goal was to maintain between 7:35-7:45 and I hit mile one in 7:31 so I eased off just a little bit. I felt good but did not want to get too excited. About that time Charles Akers passed by and we spoke for a bit before he moved on ahead.

The mile 2 marker was off and had me a bit angry but I just kept going and hoped that things would even out at mile 3. It seemed to and I had slowed down too much at just over 8 mp for those two miles.  By now I was really feeling relaxed and smooth so I picked up the effort just a little and hit 4 in 7:41. After that it was almost too easy and I began to roll off a series of 7:33 and 7:34 miles. By mile 6 I just knew that I was going to have a great day. Just stick to the plan and don't get greedy.

The spectators and volunteers were all saying I looked great and I was feeling it. My stride which I have worked on the past couple of years felt long and strong and I was just on cruise control. By mile 8 I began to steadily pass people and then I hit mile 9 with the bridge looming ahead. I wanted to run about 8 flat to mile 10 and just keep the effort steady.

The recent weeks of hitting the hills in Umstead were paying off and I hit mile 10 in 7:58 ! Right on schedule and then it was hammer time. I did throw myself off the bridge and in my mind I was starting a 5k race.  Trying to redline as close as possible, I could feel the effort but still relaxing and already excited for the celebration to come. 2 miles to go and its really starting to hurt now and soon I turn into the bit of headwind but I just dig deeper. 1 mile to go. Lungs are starting to burn and I'm starting to make my death noises but I keep pushing. I got this ! And then finally there is the finish line and I know the goal is waiting for me. 1:40:35 ! Boom ! Nailed it ! Just as if I'd had a premonition of the day. And the last 5k? 23:11, exactly 7:30 pace and the fastest 3 miles of the race !

As I passed through the chute a volunteer said I was the first of the "young guys" but I know a lot of people don't look their age but it was encouraging. Although they had my results up quickly there was nothing on placement yet so I went to change into dry warm clothes. Yes, even at 50 degrees I was sweating a lot at that effort. I got changed and then  I pulled out my phone and went online to check the results. Woohoo ! Yes !! 1st in age group out of 40 finishers and 66th overall out of 1954. I did it ! 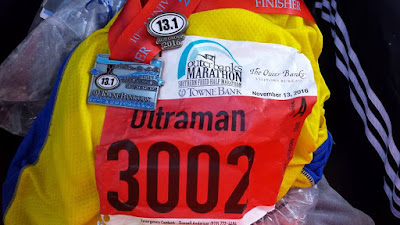 After that I walked back to the finish and found Charles so we talked while waiting for Blanca to finish. Then I went to enjoy some post race food and wait for the awards ceremony. The finish line amosphere in downtown Manteo is about the best of any road race I have particiated in so it was worth waiting around for.

So there it is Boom ! Nailed it !
A goal, a plan and a lot of hard work and smart training all came together to make a dream come true. On to the next one !