Well, sort of officially calling this the Boston training kick off week. so how do you start? With a day off ! Yes, Monday was another tough work day and no time even though I tried to get an early start. But rest was a good thing after the strong 16 on Sunday.

Tuesday it was time to head to the track again. After a 2 mile warmup on the greenway I was ready to go or at least I thought I was. Felt way to hard on the first quick lap so I bailed on the planned 800's and 400's Then I started over again slower with the idea to do some mile repeats. That worked ok but I was still a little slower than planned and working harder for it.

Wednesday was tight on time but I did get out for 5 easy and I felt surprisingly good as I finished up just at sunset.

Thursday  was an easy 6 at home. I felt ok but the legs were heavy and no zip although the last mile was decent. Think part of the dead legs was from doing squats at the gym yesterday.

Then it was fun friday once again ! Yay my most favorite day ! Laura and I were back to our normal time this week and we did the same route as last week 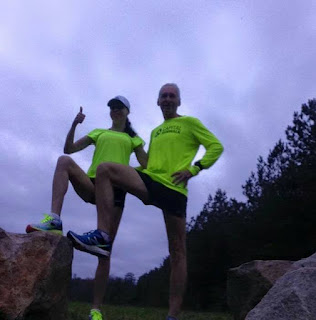 . A little slower this time but we did some pick ups in mile 3 and 4 and then did a slower recovery mile 5 before a strong push to the end.  Once again I somehow rocked another great run with her leading the way. Hard to call a 48:42 10k slow !

Saturday was another easy 6 at home and freezing temperatures were back after a week of mild weather. I wore long pants and a jacket ! I felt sluggish too and was feeling the hard effort from Fridays hard tempo.

So there is another good week in the books. 41.5 miles as I slowly build the mileage. I hope to get it back up into the 50's by january if things continue to go well.
Posted by runjoey at 9:25 PM