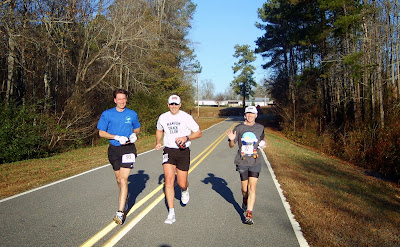 Wow, 10 years already ? Well actually 11. Time seems to fly so fast. It doesn't seem that long ago in many ways that I was a novice when it comes to this long distance stuff and now I guess I have to admit to being a veteran with 130 +  marathons and ultras on my resume. But lets get back to Derby. I didn't run in the  first year it was held. It was my first full year getting into ultra's and I had run my first 50 miler at Masochist the month before and had another 50k trail race in Virginia planned two weeks later so I thought it would be too much for me at that point. Although I was not in the race I did attend and was a roving volunteer with RD  Mark Long for several hours and then ran the last 10.5 miles with my friends Jay and Anita Finkle.  I enjoyed the experience quite a bit and was determined I would return the next year as an entrant. But I have to say I had no idea that it would become a tradition !

2005 was a big year for me as I ramped up my training and racing and my confidence had grown. I had improved my pr at Frosty 50 in Jan to 5:34:40 so near the end of the year after 12 ultra and several marathons I was really happy to get a huge pr at Derby with a 4:55. By this point I was no longer happy to just finish races but had become more competitive with myself looking to always run harder and faster.

2006 was another big year with 3x 100 milers and I still improved on my pr with a 4 :48. I was 50 that year and although their are no age-group awards I was the first grandmaster !

2007 was yet another big year and I pushed myself to yet another pr in 4:46:58 and another grandmaster win.

2008 was a bit of a tougher year for me as I was battling a nagging injury. Only finished two ultras and had 3 dnf's.  I wanted to keep the streak alive so I ran Derby but this year I took it easy.  My time was my slowest since the first in 5:37:10 but besides the leg pain I ran very relaxed and felt great. After that I did not run another step until January as I took the time off to finally let the legs heal

I did not run any ultra's in 2009 as I used it as a re-building year. I did a lot of swimming and biking and several triathlons including my 1st and only Ironman in June. After that I refocused on the running and was soon getting my mileage back up and running great. My training partner and dear friend Karla the Marathon Princess was ready to go for her first ultra so I went with her with the plan of just running together as we had for many marathons. She did great and we ran a 5:25:40. 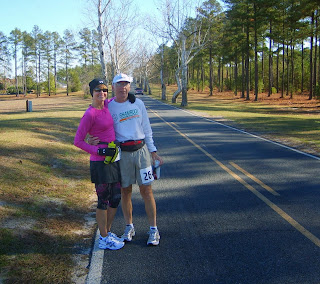 In 2010 I was running great. I had improved my pr at Frosty 50 to 4:44:11 which is still my pr. I had by now cut back on the number of events I ran and concentrated more on going for quality over quantity. I was going hard for the pr at Derby and was on pace through the marathon but I began to slow too much. never really blew up but still ran a decent time of 4:55:18.

2011 was a pretty good year with a few great runs and a few slow ones. I was going for the pr but I think a hard but very good race at Mountain Masochist 3 weeks earlier still had me worn down a bit. I was close to pr pace through the marathon but I did pretty much blow up this time and struggled in with a 5:14:11.

2012 was another decent year with a lot of miles and some good races. Amy and I had began training together more than ever working towards getting Boston Qualifiers but I was still sqeezing in some ultra's My lack of trail running and cold rain got to me in my 100 attempt at Oil Creek causing a dnf at 84.5 miles. That beat me up pretty bad and wore me down. By the time Derby came along I was feeling pretty good but just never was able to quite get up to pr pace like I wanted and I crashed hard with a 5:27:38.

Which brings me to 2013 and going for my 10th finish. I had high hopes of going for a pr as I had been running very strong in the first part of the year with great training,  some pr's and fast finishes and Amy and I had been really killing it with the speedwork. I had even run my fasted 5k in over 25 years back in June, but then the injuries hit in August  and just when I thought it was getting better it took a turn for the worse in mid September.  So I guess I will have to pass on the pr attempt and just enjoy the day and get my 10 mile finishers chair !
Posted by runjoey at 9:34 AM

Enjoyed reading this. You have a long history at Derby and I hope to get their one year (I am running my 3rd this year). On a side note, if you go back a look at last years results you cheated yourself out of 5 seconds and took my time. I remember you from last year because I had passed you in the last mile and right before the final right turn to the finish, I cramped up and you passed me back. I worked the cramp out and was gaining on you when you hit the finish 5 seconds ahead of me. Good luck tomorrow!

Nice to hear your history with this race. Looking forward to joining you out there at the start tomorrow.