My travels to Corning went well on Saturday with no issues. I drove straight to the expo from the airport and was happy to see The Werners just 2 cars ahead of me heading into the parking lot. Talk about perfect timing. We picked up our race packets and just before leaving we found Ronnie Jones, a CRW racing teammate that was running the marathon also. We walked over to the downtown area and found Rebecca Sitton, the last of the group and went to find some dinner before heading to our separate rooms for the night.

I woke up an hour early with excitement of the race just ahead. I wasn't too happy with the weather which was about 20 degrees higher than normal for this area. It was mid 60's with chance of rain and humidity near 100%. Oh well, you do the best with what you got. My main concern was whether or not the legs would hold up to the pace and distance I was hoping to run. They had felt a bit better and I was hoping for the best. 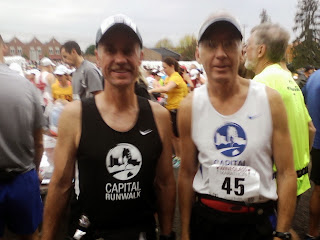 I hitched a ride with Ronnie to the start about 3 miles from the hotel and there we waited for Karla to arrive. Frank and Rebecca were doing the half which started , well halfway on this point to point course from Bath to Corning. We made our last minute preparations and then headed up the hill to await the start. Then it started to rain with 3 minutes to go. Not but a sprinkle and with the high humidity and warmer weather I actually wouldn't have minded if it rained later. 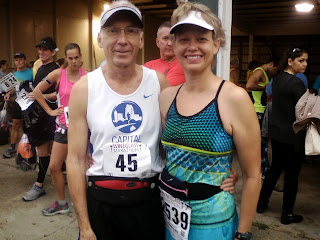 The first half mile was downhill which allowed me to run at about my planned race pace with the effort closer to my training pace. The course then flattened out and I hit the first mile in 8:09. Pr pace is 8:12 so I was pretty happy to be right there. But I wasn't happy because the right leg was already tight and hurting. It wasn't too bad and all I could do was hope it got a little better and I could keep going. The 2nd flat mile was an 8:07 and with that I decided that yes, the pr attempt was on.

I relaxed a little too much mile 3 in 8:21 but was right back where I needed to be with an 8:09 fourth mile. Mile 5 had the first significant uphill which slowed me down a bit to 8:23 bu tfor 5 I was 41:12 and right on pr pace. Mile 6 had some more climbing and then from 6.5 to 8.5 I was surprised to find that it climbed the whole way. It wasn't steep but it still took an effort and my pace was slowing to the 8:20's. At that point I realized with the warm conditions and a few more hills to come that I would not be making that time up so I switched to plan B which was to just get the  Boston qualifier of 3:40 which is an 8:23 pace. I was steady clicking away the miles at 8:20 to 8:22 and feeling very good other than the constant pain. It did seem to ease off a bit for a couple of miles but never went away like I had hoped.

I passed through the half marathon point nearly dead on 1:49:00 which gave me a one minute cushion to work with, or about exactly where I needed to be.  There was a nasty hill just before mile 15 and I backed off the effort a little bit. It was then that the 3:40 pace group went by. I wasn't worried because I knew they were slightly ahead of pace and as soon as we crested the hill I was reeling them back in and ready to settle into pace behind them over the next several flatter miles. Well that was the plan but my leg had other plans.

Just before reaching the 16 mile point the leg just suddenly gave out on me. The pain sharpened and I had to limp and just could not extend the leg anymore. I walked into the water stop and tried to massage it and stretch it a bit but as soon as I began to run it was obvious that my race was over just that fast. Even my hopes of at least going for my 2nd fasted time were shattered. It was all very frustrating knowing there was really nothing I could do to change things.

I saw a sign that said next medical tent 1 mile so I kept moving forward and figured I would drop out there. But as I got nearer I knew I really didn't want another DNF. I had plenty of time to finish but I did not want to have to walk the whole way or make the injury any worse.  The pain had eased of enough that I could run at a much slower pace without limping so I just went into my ultra shuffle  pace and mindset. As long as I could keep moving and not limp I was going to get to the finish and get my medal !

It didn't help matters when the sag wagon with a few casualties inside came up behind me near the 18 mile mark but I resisted and kept moving. By now I was walking backwards a lot and looking to see if Karla was coming. I had been hoping she would run a sub 4 hr and doing the math in my head I knew that she should catch me sometime before mile 19 if she was on pace. Well, I didn't see here and by mile 20 it was obvious she was not going to do it today. Not long afterwards she finally caught up to me. I ran about 1/2 mile with her before I had to walk some more.

It really stinks having so many people pass you in a race like this and especially knowing I was fit enough to be way ahead of where I was at but I just sucked it up an kept moving as fast as I could without making the leg any angrier with me. When Karla had passed I told her it would probably be a 4:45 finish for me but I was able to move a bit faster than I thought and I soon figured out I had a shot at going under 4:30. Really a meaningless goal at this point but it gave me something to focus on and yet another goal  to shoot for.

I was so happy to finally see the bridge crossing the river and into downtown because I knew I had about 1/2 mile to go and I would break the 4:30 barrier. The crowds along Market Street were great cheering for us and despite the disappoint of the injury I was able to smile and wave to the crowds and enjoy the moment. I saw Rebecca taking a picture just before the finish and then it was over in 4:28:44. 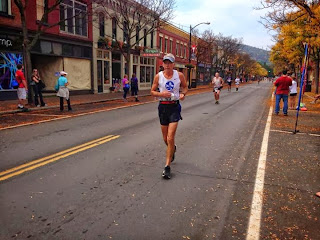 I felt pretty rough in the finish area for a few minutes but soon Frank and Karla and Rebecca came by and before long I felt a lot better. As I was getting up from the curb where I had been resting, Rebecca made some comment in joking about my pushups. So I dropped down and gave 50 which she recorded. That was a lot easier than running the marathon. 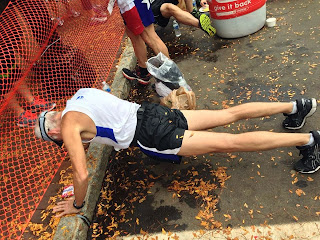 So now it's time to heal and hope it won't be too long before I can get back to running again.