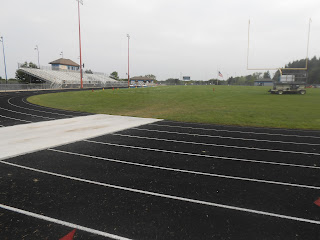 I guess you can look at this as both a rousing success and an epic failure rolled into one race.

I'm not going to bore you with the details of a race that went around and around in  400 meter circles or make any excuses on why I failed to finish the event. I certainly can't blame the weather. Although it wasn't ideal  for this time of year I couldn't have asked for much better. It never did get cool and was about 70F at the start but the high was never more than around 78F with moderate humidity, 50% cloud cover and during the mid-day hours a bit windy.

The race started a 8 am with 24 runners. We were chip timed and there was an aid station at the start/finish area that was well stocked with the usual ultra fare with more real food added as the day progressed. Every three hours we would change direction so the scenery changed a little.

To make a long story short, I was doing a great job of keeping with my planned run/ walk schedule all day. The pace for the first few hours was a bit faster than expected and I have to say that is probably the cause of my downfall. Not that I was running too fast but because I began to have delusions of grandeur and was imagining myself racking up more miles than even my fantasy goal because I was feeling so good. That's where the problem started because  I wanted to maintain the pace and  so I began to neglect my fuel and hydration schedule.

Around 40 miles I should have taken a short break and made sure I was caught up with the fluids and fuel but I knew I had a 50 mile pr in the bag if I maintained my current pace. Pretty dumb huh? Yes I got the pr, officially 9:57:21 but due to the  length of a lap around the track that was for 50.22. If the 50 had been marked it would have been around 9:55. Well, I knew and know better than to run a 50 mile pr and then expect to run well for another 14 hours.

I walked a mile then rested for a few minutes and tried to get some food in me. Went back out and was having a hard time getting back into a groove. I sat down again to eat a grilled cheese sandwich and walked some more and by the time I finished that 11th hour I had only covered another 2.25 miles. I was finally beginning to feel decent again over the next hour and got in another 4 miles but then the wheels began to fall  off again. I tried in vain over the next hour to get back in control but it was no use. I decided to try and get in at least 100k and a new pr for that distance but at 59 I was toast. I walked one more slow mile to make it an even 60 and called it a day.

I'm sure I could have taken frequent breaks and walked a lot and gotten in at least another 30 miles but it would have been a meaningless number and just a week before I had advised another  runner planning to do Hinson Lake 24 to just run until it wasn't fun anymore. I decided I would take that advice and save it for a better day. I have the Oil Creek 100 miler coming up on Oct. 13th so rather than beat myself up I did the wise thing and quit. Yes, the wise thing but I hate quitting and not completing a goal.

So now I move on. It looks like I made a smart decision because I have had practically no soreness from the race and began running again on Tuesday with a good 5 miler with Amy. I even surprised myself how well I ran and the pace for that run and the remaining workouts this week have all been at my normal pace.

I don't have any pictures from the race but I did take some of the Milwaukee area the next day.
Posted by runjoey at 9:00 PM

Joey, you might be slightly disappointed, but there are so many of us even marathoners in awe of anyone like you who gets any distance past 26.2.