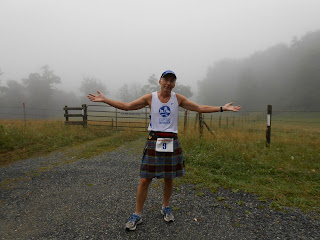 Normally I would have been really excited about traveling to run this race but although it is one of my favorites and this would be my 7th, I knew this year was going to be a tough one for me. The 4 weeks leading up to it had been a bit rough on me physically. My recovery from the dog bites and the 62 miles at Boogie had been a lot slower than I had hoped for. Usually I would be feeling fine and ready to rock a strong effort within 2 weeks of a 100k but the combination of the effort along with the dog bites and bleeding, two weeks of antibiotics and some really hot weather had me feeling pretty worn down.

I had taken a week off and I normally don't even take off that much time after 100 milers but my legs were in a lot of pain and because they couldn't suture the punctures I was still bleeding through my bandages and clothes for several days. But the rest I'm sure was good for me and after I began running again I felt like I was slowly recovering back to normal. I was finally able to run pain free after the end of two weeks and was running close to my normal mileage but by 5 miles or so into a run I was really starting to  get tired. Then last Saturday I was hoping to get in an easy 10-12 miles with Karla on the greenway but I had to bail at 8.6. Not the way I wanted to feel going into race week.


So , I tried to take it easy the remainder of the week leading up to the race with just a few easy shorter runs and headed up to Boone with a plan to just run to survive. There would be no fast time for me and I am so glad I hadn't planned anything foolish like a "Double" this year.

I arrived at  the ASU track at 6am, and the morning thunderstorm had moved on leaving us with 100% humidity for the day. The temperature was in the mid to upper 60's and expected to move to the mid 70's so although it wasn't going to be a hot year, it was going to be a miserably muggy one. It was great to see so many friends from the NCRC and MTC and others from the Triangle area.  I found  The Trail Angel and then  lined up with Lisa and Dale Tiska for the start.

We began at an easy pace and were enjoying the conversation as we headed out on the slight downhill through town. Shortly after turning onto Winklers Creek Road the first climb begins and we hadn't gone far past the two mile point when I let them pull ahead. I was enjoying the company but needed to stick to the plan. Shortly after that, Gene Meade and I started running together. It was his first time running here so I was giving him info on what to expect out on the course. We were both content to take it easy and walk the steeper portions of the climbs in these early miles. By three miles everyone was already dripping wet  from the oppressive humidity. We were running through a light fog nearly all morning and you could see the water droplets forming on the hairs of my arms. There would be no evaporative cooling effect this day.

Gene and I were enjoying these early miles and we passed the 5 mile point in 1:00:00 even. With the walking I was a little surprised with the 10 minute average pace but there was some downhill mixed in there. We continued on until we came to a water stop at mile 8. It was on a downhill and  as Gene stopped to refill his bottle I continued on. I looked back as we made the turn onto Shulls Mill road and begin the next long climb to see if he was close enough for me to wait but he wasn't there so I went on ahead.

I was moving a long well on the next climb and continuing to walk the steeper portions of the hill and generally just enjoying myself. Around the 9 mile mark I was disappointed to see Lisa about 1/4 mile ahead.  If she was having the kind of day we expected I should not be seeing her until the finish. She quickly disappeared around a curve and I didn't see her again for awhile.

Every year that I have run this race since 2008, I have passed by the 10 mile point in the race with one of the Angels along and we have stopped at a small turnout on the road that the first view of Grandfather off in the distance. Well, today I had no Angel along for company and the view was nothing but fog and clouds. I stopped anyway for a self portrait and then a young lady came up and took one of me and then I was off on the run again. I was really shocked at my split for that 5 miles. There had been a couple of miles of downhill but mostly climbing and I had walked most of the steep parts. That made me a little optimistic because I was feeling pretty good and had not been pushing the pace at all.

A mile later the course reached the Blue Ridge Parkway and I was looking forward to the nice 2 mile downhill that lay ahead. IT is not too steep so you can run it pretty fast without too much effort or damage to the legs. I ha;t gone far when I spotted Lisa up ahead. She seemed to be moving well but I was gradually closing the gap. Just as we reached the bottom of the hill I came up behind her and told her I was really not expecting to see her. She said she had been having some trouble breathing earlier but was feeling better so I just stayed behind her since we are suppose to run single file on the Parkway, hoping to run with her for awhile. We went through the half in about 2:17 and the way I was feeling I began to think maybe a 4:40 was possible.

Just past this point is where you get your second view of the mountain, much closer across a meadow but all we saw this morning was more fog. At least I knew where it was. The road begins a gentle 2 mile climb at this point and within a few hundred yards  I was having to chop my stride too much to stay behind Lisa so I had to go ahead and pass her and hope she would be able to hang on. I continued to run well all the way uphill to the end of the parkway section and the 15 mile point and was once again very happy with my pace for the past 5 miles.

It gets a bit tougher again from this point. there is a fairly steep hill once you exit off the parkway and I walked most of it to the water stop at the top and the beginning of the gravel road section. It is relatively flat for about a mile and then we come to "17" hill. It is quite a bit like a couple of the hills on North Turkey Creek in Umstead and it is a walker and the humidity today in the woods was stifling. Of course the humidity was  still about 100% everywhere anyway but it sure seemed worse on this climb. At the end of the gravel, the course turns onto Hwy 221 which it follows for the remaining miles to MacRae Meadows and the finish. And it continues climbing fairly steeply to the 18 mile point and then it levels out a bit. I was able to start back running again but already I could tell I was slowing down a lot.

The course continues mostly uphill from here with an occasional little bit of downhill so you can relax a little bit. I learned from doing the double in 2010 that there is a lot more uphill on the return trip than you would think but after 20 miles or so coming this far on this tough course it seems ALL uphill. To make matters worse I was starting to wheeze when I was walking. the wheels were coming completely off now and my energy was not just fading but going completely away. My hamstrings were aching and my heart was racing and slowing down really didn't feel much better. Now I just wanted to get it over with as I mentally thought,  with each passing mile, well there goes 4:45, there goes 4:50 to finally , I',m not even going to break 5 !

I should have packed it in those last  few miles and walked it in but being the hard head I am I kept pushing as hard as I could, determined to end the suffering as soon as possible.  Finally entered MacRae meadows and as i entered the stadium for that last 1/4 mile I was fighting back tears. I'm not sure if it was because I felt so bad or I was  just so happy that I could  finally stop. The crowd was great cheering me and the kilt and I was getting lots of comments and I was blowing a few kisses to them as I slowly circled the track. 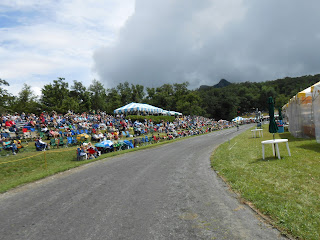 Can't wait to get back next year !

here is a link to the rest of my pictures.

Tough day at the office Joey. But Next year you'll get even!