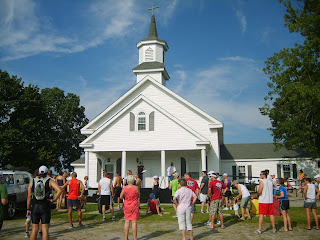 The first time I ran in the Boogie was back in 2005 which was the first year that Doug had added the marathon to the event. Karla and I had just began training together the month before so I thought it would be fun to run with her for training for my upcoming 100 in Vermont. The slogan for the new "half " Boogie was "A little Boogie is better than none at all" which I paraphrased in the song I wrote into "a little bit of Boogie is better than none".  Well, that got me to thinking that twice as much Boogie should be pure ecstasy !

Right now most of you are thinking, ok, he has finally completely lost his mind and you may be right.

I got the idea to do this on the way home from the 50 miler last year. I was joking about it but by the time I got home I had made up my mind that unless I got into Western states this year that my summer 100 would be the Double Boogie. Of course I had to wait until the lottery for WS in December but as soon as I got the rejection from them the plan was set.

I met with Doug "Boogieman" Dawkins the race director at Weymouth Woods back in January to let him know what I was planning. He just looked at me and said OK. Is there anything I needed for him to do ? I told him no, that I had planned on being self-supported for the first 50 miles and then I would use the race aid for the second 50. We agreed that it was best to keep it quiet which I had planned to do anyway. The only ones that were let in on the plan were my trusted Angels of course.

If things go according to plan I will begin my race at 6am Saturday morning giving myself 12 hours to complete the first 50 miles so that I can start the official 50 miler with everyone else. Ultramom Amy  is planning on coming out early Saturday to keep me company and run a little bit and crew for me until around noon. After that I'll be on my own again until later. Ultra Angel Jenn is running the 50 and Mountain Girl Lisa is in the marathon. Hopefully they can give me a little encouragement before their races start and then afterwards Lisa is going to drive me back to Raleigh so I can get some rest after completion of the first and only Boogie 100 !

With the great weather report it looks like this won't be quite as much the ordeal I was expecting. I had planned on temps in the 90's most of the day but now it's looking like about 82F is the projected high. It is still pretty warm and a challenge on this hilly course and the pounding of the pavement will still give me a beat down I'm sure. Barring injury I plan to finish this thing and secure my spot in the Idiot's Hall of Fame.

I look forward to seeing many of you competing  and volunteering out there this evening !
Posted by runjoey at 4:41 AM

And NOW you've added a dog attack to the challenge. Best of luck, Joey! I'll see you this afternoon!