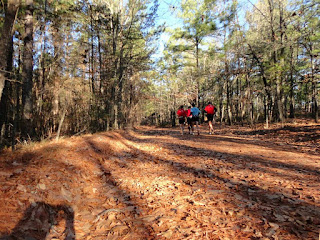 I hadn't planned on running this one until a month or so ago when I had to make an adjustment to my racing calender for February but with the change this would fit perfectly into my training schedule for the upcoming Umstead 100. Anytime there is an opportunity to do a run with the great people at a Mangum Track Club you know it's going to be a good time for running and fellowship so I was glad it worked out for me to attend. The event was limited to 75 and it was full with a wait list up until this week when a lot of folks dropped out including sadly a couple of my Angels that I was looking forward to sharing some miles. It ended up with only 53 showing up to run and the no shows sure missed out on a perfect January day for a run.

My day began with meeting up with Charles West in Cary to share the ride down to the site of the event on the All-American trail which skirts the southern border of Fort Bragg in the Sandhills of NC. Let me emphasize Sand HILLS, not Sand Flats. Having lived in the area for 4 years in the early 80's I knew to expect some hills but I was a little surprised that it was hillier than I had imagined. That was actually a good thing to me because the main reason I came was for training and it was nearly perfect for that reason.

So anyway , we arrived about 30 minutes before the start and spent the time meeting and greeting friends. Finally got to meet one of my Daily Mile friends, Rachel Dubois who would be going for her first ultra.

Just before the start I was making my final preparations when I realized I had left my water belt in my car back in Cary. Hmmmm, 50k with no water bottle. Well it wasn't hot and I have been referred to as a camel by Jenn for my tendency to run long runs without water. At least I knew Mark had made arrangements for some aid at a couple of locations so I was hoping I would be able to get enough fluid to keep me moving strong. I couldn't help but think about the gentle scolding I would get from Guardian Angel Jenn if I ended up dehydrated and struggling.

This was not a race for me so I'll spare the blow by blow, mile by mile account. My goals were to have fun, finish around 6 hours, run near even splits and feel like I could go back out and do it again if I needed to. Mission accomplished on all four goals ! Everything went to plan and I felt great and had a wonderful time out there. After the first 2 miles I was mostly alone but I was able to share a couple of hours on the trail with Ricky Scott and get to know him better and it was nice to be able to see everyone on the out and back course.

Fortunately I was able to stay strong to the end thanks to the volunteers that spent their day out there on the course. I was able to make it with 6 small cups of gatorade, 3 gels and 2 chocolate chip cookies. With 6 miles to go there were some jugs of water but no cups. I tried to pour some into my mouth but more was going done my chin and on my shirt so I gave up with that idea. 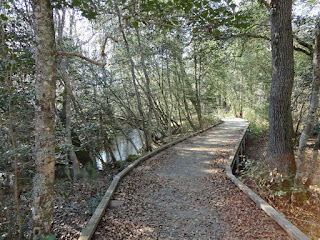 Big Thanks to Mark Long, Fred and Susan Dummar and the rest of the volunteers for a great day on the trail. And congratulations to Rachel and several others for completing their first ultra's !

Oh and thanks to Mark for the photos since my camera was back in Cary
Posted by runjoey at 9:28 AM

Next year! I really want to do this one!