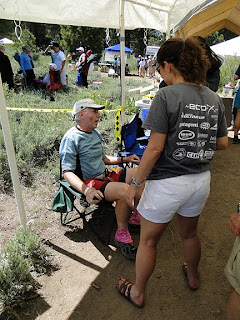 Recovery from Tahoe Rim has been a little slower than I had hoped for but I finally feel like I can began to train normally again. I had taken off 4 days from running and then slowly worked my way back into it. By the end of the 2nd week I thought I was ok but after one or two good runs I would have a bad day. Attempts at moderate distance longer runs (12-13) the past two Saturdays were failures. I quit at 10 and felt wasted the first time and this past weekend was worse , quitting at just 8.2.

It has now been four weeks and it seems that this is about the way it was after Leadville in 2006 so I guess it is normal for me after running one of these tough mountain 100's at altitude. My recovery after my other 100's has been a lot quicker. After OD in 2006 I ran the Boogie 50 just two weeks later and even after my first one at Umstead I did the tough Promise Land 50K++ just three weeks later.

The good thing is that I had and have had no pain or injury issues. Just the normal soreness for the first week and the blistered areas were fine within a few days.

So I rested again on Sunday and then went out for an easy 6 on Monday. Nothing great but I got through it feeling ok. Today was the real test. I went back out to Umstead to once again attempt a 12.5 miler this afternoon. Success ! I felt good the whole run and after I was done I felt like I could have easily kept going. The lower humidity helped I'm sure.

Now I think I can finally resume my training. I have several more ultra's on the schedule for the year and I plan to do as well as I can in each of them with at least some specific training geared to each one but the main focus is to build toward a PR attempt at the Umstead 100 next March.
Posted by runjoey at 8:09 PM

Joey, you are a beast my friend!!