A little test and a little fun 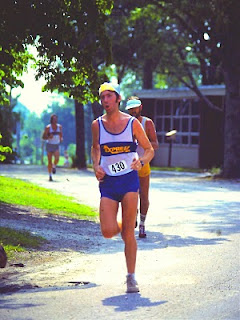 My training is back on track and I'm feeling 100% after getting sick 3 weeks ago so I'm feeling confident as we move into the Spring racing season. Of course the focus is on being in my best shape for Boston right now and so far I have been able to stay on the schedule I laid out last Fall and haven't missed any key workouts.

This Saturday, March 5th I have decided to run the Wake Med Cary 5k for a little fun and as a test to see how the speed is going. I had not included this one in the original training plan but saw a couple of months ago that the timing was about perfect for it. I have never run the 5k at this race before but back in 1999 and 2000 when I was on the comeback from my knee injury (soccer) in 98, I ran the 10K version. I haven't raced a 10k in almost 2 years but decided that the 5k fit the plan a little better.

You may have noticed that the picture above is a little old. I haven't had that dark hair in a very long time. It was taken at the Zebulon Freedom Run 5k on July 4th and I'm almost positive that it was in 1982, maybe 83. If it is 82, then I am in the process of running my 5k pr of 18:40. At the time I was still living in Fayetteville before I had moved to Zebulon. Another cool thing about this race was that my Mother, brother and wife also ran that day. I will not be running anywhere close to 18:40 in Cary this Saturday but you can bet I'll be giving 100% effort.

Stay tuned for the results

Oh, and for you NCRC and Raleigh area runners, that is Jim Young, former NCRC President and owner of Young and Associates timing company just behind me with the cool socks. He will be timing the race this weekend.
Posted by runjoey at 7:30 AM

Oh, we gotta get that picture in the club archives... :-)