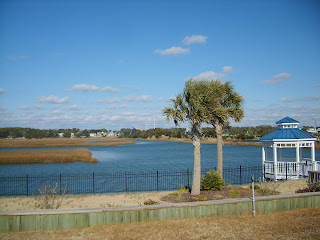 The defining word of the day for this race would have to be WINDY !!!

I was liking the fact that the race would not start until 9am allowing me to awaken at my normal time and not have to rush to get ready. I was staying in North Myrtle Beach, about 12 miles away. Just before I left to head over to the Island, I got a message from Laura Frey who was staying on the beach that it was a beautiful morning and mostly calm. That would quickly change.


I arrived to pick up my race number at 8am and met up with Lisa, Laura and John Williamson, who I just met this morning from Wake Forest. Already the wind was picking up with the temperature about 40f and sunny. About 8:30 Lisa and I ran a warm-up mile and as we ran into the wind we could tell a difference but it still hadn't began to blow like it would be soon.

We lined up with the 5k runners and the race got underway. I was running very relaxed and not getting caught up in the excitement as we began the first climb over the high bridge connecting to the mainland in the first half mile. I made sure to keep the effort easy until cresting and heading down the backside. I reached the 1 mile mark in 7:43, ahead of pace and feeling great. That boosted my confidence and then I saw Laura already around the turn and heading back toward the bridge. We high five'd and I continued on. Lisa was just a short distance behind me.

We were back climbing the bridge back to the Island at 1.25 miles in and once again I just relaxed until I was over the top. I passed mile 2 in 7:52 and made the turn toward the East side of the Island ( Ocean Isle Beach actually faces South as do Sunset and Holden Beaches) The wind was at my back now and I just relaxed and settled in to a strong pace. I was feeling fantastic at this point and felt I could hold this pace forever. Clicked off miles 3 and 4 in 7:53 and 7:51. Loving the even splits. About here we once again could see the lead runners coming back toward us as there was another turnaround just past mile 5. I was feeling great and got a little excited and ran that mile in 7:46 but I could also tell that the wind behind me had gotten stronger. I was not looking forward to starting back toward the west end of the Island.

Well it was worse than I thought it would be. I knew it was going to slow me a little and take more effort but by now the wind was blowing directly into our faces with nothing to slow it down. Steady 18mph wind with gust around 30mph. My time for mile 6 slowed all the way down to an 8:18 and I was putting out as much effort as earlier. All we could do was dig in and put the head down and push on. A small group of runners passed me slowly and I tried to fall in and draft but they pulled ahead anyway.

I missed the 7 mile mark but as I approached mile 8 the effort was wearing me down and the gust made me feel like I was running in place at times. I was really worried I had fallen even more off the pace but if I tried to go any harder I could feel a side stitch coming on. I was relieved at least to get to the split for mile 7 and 8 combined in 16:37 (still on 8:18 so i was at least consistently slow into the wind) Hit mile 9 in 8:26, discouraging but at least the course would turn out of the wind in another half mile for a brief time. After 4.5 miles into the headwind we turned into a neighborhood for about half a mile and I immediately felt better. I was afraid all the pushing would have zapped all my energy.

Too soon we were back into the headwind for another mile and I went through mile 10 in 8:27, my slowest of the day and the only thing keeping my spirits up was knowing the last 2.5 miles I would have a tailwind. As soon as I made the turn I had a surge in energy and picked up the pace and started reeling in a few runners. Passed mile 11 in 8:15 and I felt great. I continued to run well the last two miles in 8:11 and 8:05 and crossed the finish in 1:46:19. My goal had been 1:45 and with the tough conditions I feel confident I could have run between 1:43 and 1:44. My legs felt great all day and I was still strong at the finish boosting my confidence as my training for Boston advances. 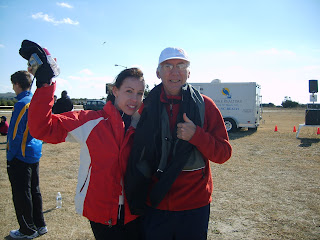 Laura would go on to finish as 3rd woman overall in 1:31. Her splits showed the same story as mine. You could clearly see the miles that were into the wind. Lisa had a great race easily winning her age-group and setting a pr despite the wind. John would take 3rd in his age group. I was shut out of the awards myself coming in 4th. There were some very talented men competing with the winner for the 55-59 males in 1:27 ! 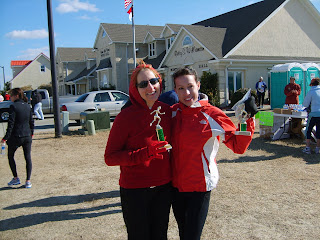 Here is a link to the results.
Posted by runjoey at 8:18 PM

I just hate the wind!! Nice job though! Way to hang in there!

I appreciated your comment about some very talented runners competing - I am the 55-59 year-old male who ran 1:27.

thanks for the comment Dave. That was a very impressive time for you. I will be looking to see you in results in future events