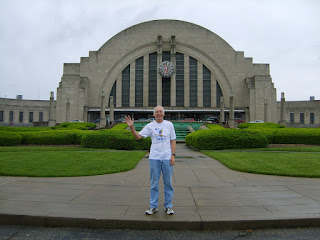 Looking back I must say that 2010 has gotten off to a great start and certainly better than the past couple of years. Overall the training has been going well. My mileage goal for the year is 2400 miles and I'm only 10 miles off that pace mid-year. I've been very consistent with the workouts which is always a good thing. Karla and I have only missed a couple of our key workouts all year meeting at the track in blazing heat and freezing cold, wind and rain but it has paid off. We switched to hill repeats in May to build strength for the hills of Boogie and the upcoming Grandfather Mountain Marathon. We've been joined by Lisa on most of our weekend long runs and we three try to meet every Thursday for a mid-week 10 miler in Umstead.

I began the year with the 5k Resolution Run and had a very good effort on a hilly course. A week later in frigid conditions I set a new PR at The Salem Lakeshore Frosty 50K. This was especially satisfying in that I have run this race 6 times since 2003 and was still able to improve at 54 years of age. It was a great trip with the ladies Karla , Lisa and Jenn. What a lovely bunch of traveling partners I have. Yes,it's good to be the Ultraman.

February was a flop with the Myrtle Beach Marathon being canceled but the ladies and I still got in a great half-marathon workout on Ocean Blvd and Lida even set an unofficial pr for the distance.

March brought us to the Tobacco Road Marathon. Under nearly ideal weather and racing conditions I was able to run my second fastest marathon and achieve my goal of racing my way back to a Boston qualifier in 3:45:00. Karla and Lisa also qualified so we have already booked our rooms for a special weekend in Boston next year.

In April I ran with Karla in the Tarheel 10 miler where she got a pr and I had fun and got in a great workout. Then two weeks later we traveled to Asheboro for another 5k. I had a great run on another perfect weather morning running my fastest at the distance in nearly 5 years while winning age-group. Karla won first masters lady and Frank also claimed an age-group award.

May found us traveling to the Flying Pig Marathon in Cincinnati with my buddy Jerry along for the fun. I had a bit of a disappointing race on a rainy morning but still enjoyed the weekend. Jerry had a bit of a revival after not training very much for awhile. Karla's race was a bit slow too while Frank ran his usual time in the half-marathon. A week later when I normally would still be in recovery mode, I raced the Garner 5k and amazed myself dropping my 5k time for the year down to 21:33 finishing 2nd in my age-group.

June has turned out to be one of the hottest early summers I can remember but we've still been getting out there and getting the training done. I ran a slow hot miserable 5k at Archers Lodge and then a week later headed down to Ellerbe for the Boogie 50 miler.

Looking ahead, I have the Grandfather Mountain Marathon next weekend on July 10th. It will be my 6th time running and this year should be special. More on that later. I don't expect to do any racing in August but will be training hard for an attempt at a fast marathon in Allentown PA on Sept 11th.

In October I will be racing for yet another 50K pr attempt at the New River 50k in Virginia. Annette Bednosky is the Race Director and I look forward to finally being able to run her race. I had to miss the first two editions.

I've decided just in the past couple of weeks that I will return once again to the OBX Marathon in November and hope for cool temps and a chance to race hard and make up for last years very slow painful death march. Then if I can work it out I would like to take a trip out to Nevada and run the Valley of Fire Marathon with Margo. No plans for December so we'll just see how things are going then. Mainly I'll be focusing my training then on a marathon pr attempt at Boston 2011.
Posted by runjoey at 7:49 AM