The rest of the Ohio Trip- Serpent Mound 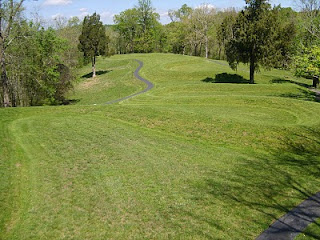 One of my favorite things to do when I travel to a race is to get out and explore the surrounding area. My interest is usually oriented more towards the natural and scenic areas and I also have an interest in the historical sites. Although I do occasionally enjoy some of the modern attractions I especially like to get a feel for an area and try to imagine what it was like long before my arrival. Exploring questions about why a town or city ended up where it is, looking at the old architecture, what drew people to the area. Of course with Cincinnati , the Ohio River was the main influence for it's development.

So on the Monday morning after the race with Jerry already back in Raleigh and the Werners back in Dayton, I set out by myself to check out the area. My first destination was to Serpent Mound Historical Park which is located about 60 miles east of Cincinnati. This is an archeological site,that was built about 1,000 years ago by the best estimate of the scientist that have studied the area. I have known about the existence of the park for many years and always wanted to visit if I got the chance. The drive over was pleasant with little traffic as the region is very rural once you leave the city of Cincinnati. It is mostly flat with the occasional rolling hill, green with pastures and farm and woodlands that could easily pass for the eastern peidmont area of NC.

Upon my arrival at the park I started over to the small museum but as seems to be normal with my luck it was closed for renovations but most of the information about the site is on the signs around the area. It is a beautiful area with the mound winding around a parcel of land on a small hill with cliffs on two sides overlooking the Ohio Brush Creek Valley. The mound itself is quite large and is nearly 1/4 mile in length from head to tail. They have an observation tower that you can climb up to get a look over the whole site. At the end past the head there is an overlook with great views of the surrounding countryside.

After checking out the mound I hiked down a trail that leads to the base of the cliffs and passes underneath the overlook. There is a small creek at the bottom that flows into the larger Ohio Brush Creek that was very pretty and there were numerous wild flowers in bloom and a small waterfall across the creek. Due to heavy rains over the weekend the creeks were high and the trail was flooded after a short distance so I hiked back up to the mound. Just past the serpents tail , the trail goes down the other side so I decided to see if I could get a better look from the bottom on that side.

The first thing I saw as I started down was a green snake lying across the trail. I got a few pictures and wondered if his ancestors were the model for the mound. Further down the trail you can see small caves in the cliffs and just before reaching the flooded portion of the trail I could see up to the overlook.

After hiking back up to the top I walked around to explore the rest of the grounds. There is one effigy mound in the park but there are many more in the surrounding area on private land. The park keeps a meadow maintained for wildlife and I saw another large brown snake sunning himself. He didn't seem to mind me taking his picture or walking around him and he hadn't moved as I continued on. The Buckeye trail passes through the park on it's long 1400+ mile journey around the entire state of Ohio. Anyone up for a real long run?

After leaving the park I headed South for about 30 miles until I came to the Ohio river at Aberdeen Ohio, with Maysville Kentucky on the other side. The river was swollen from all the rains and an amazing amount of debris was washing downstream. I took Highway 52 West from here back in the direction of Cincinnati. This is the same Hwy 52 that passes through NC from the Virginia border , into Winston-Salem and on South.

Lots of nice sights and views as the Hwy meanders along side the mighty Ohio River. I stopped along the way at another historical park, the site of a village that was built for the families and workers of one of the many locks that were on the river from Pennsylvania to the Mississippi. This one was called Chilo #34. Several of the original buildings remain including the power house which is now a museum and of course it is closed on Mondays. The locks here were replaced when a newer and more modern dam was located about a mile downstream and the area where the locks and the promenade were located is now under 30 feet of water.(A few more feet on this day with the flooding).

My next stop was the birthplace of U.S. Grant in Point Pleasant. And of course it is closed on Monday and Tuesdays. It is a very small white wooden home with an interesting story to it. You can read it on a placard that I photographed. They have a small park along the river here and although I was a bit tired and sore from the marathon I wanted to get in a little run and this looked like a good place to do it. Most of the area you are either running flat parallel to the river or if you head away from the river you have to do a lot of climbing up the bluffs. I was hoping to avoid the hills so with Big Indian Creek flowing into the Ohio here I thought maybe I would run on the road beside the creek.

It was about 82F but no humidity and as I hoped the road was a very gradual climb with some flat and a little downhill. I felt ok and was glad I chose this route to run. Not far along a small creek passed under the road several times and it was one of the prettiest I have ever seen. It is called Col Colzater Run and is named after one of the first trappers/explorers that settled in the region. The creek flows in little falls over the shelf of layers of sedimentary rock until it flows into the larger Big Indian Creek a mile before ending in the Ohio River. After my run I drove back up the road to get a few pictures before heading back to Cincinatti and a good nights rest.

Here is a link to all the photos I took on this day.
Posted by runjoey at 8:32 PM