Looking for a fast time in Asheboro 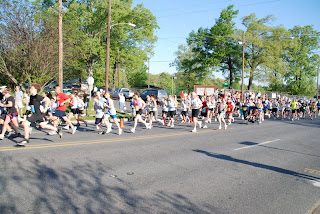 With marathons, ultra's and the occasionally triathlon being my focus for the past 8 years, I haven't entered very many shorter road races but every no and then I like to race one just to see how much speed the old guy can still produce. normally in April I would be looking forward to running the Promise Land 50k on this weekend or maybe the Bull Run Run 50 in April but with my focus on getting faster the past year I decided to enter more road races.

Back in 2001 and 2002 when I was mainly concentrating on tri's and a few road races for fun but with my mileage and conditioning much less than it is now, I went to Asheboro to run the Zoo Run 5k. It was a great little low-key local race and was sponsored by the NC Zoo. It made a great excuse to go run a race and then spend a nice Spring afternoon walking around the zoo. It was great to be able to take my then teenage son Jeremy along for a fun father-son outing. the race is no longer sponsored by the zoo but that doesn't mean you can't still go and see the zoo anyway. I had talked about it several times with my running partner Karla but it never worked out that we could go but this seemed to be the perfect chance. She and Frank have never been to the NC Zoo and she loves meerkats so that was all it took to make plans to make this the year.

The race, now called the Randolph County 5k Health Run is held at Memorial Park in Asheboro. It is a relatively flat course considering how hilly the Asheboro area is, at least I seem to remember it that way. And that's what I had told Karla, but looking back in the journal I seem to have noted that the 2nd mile was hillier than the first. Hmmmm, We'll find out tomorrow I guess.

Anyway I'm just looking to run as fast as possible. I hope to run under 22:00 for the first time in almost exactly 2 years. Karla will be shooting for a Pr and Frank will hope to run well and maybe get an age-group award.

Here is a link to the race website
Posted by runjoey at 8:21 PM