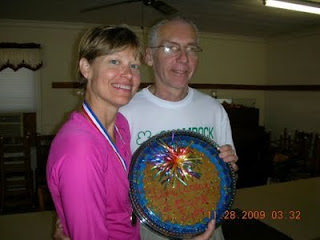 Wow, what a perfect day for running. Clear blue skies, in the 30's to start and warming quickly into the 50's with just a little breeze. We couldn't have asked for a better day for Karla's first ultra. We had originally planned for her to run her first at the Frosty 50k in January but with the way the Boston qualifying situation has turned out she changed those plans and decided on Derby for her debut. This will work out better for me too. I hope to make another 50k PR attempt and I think I'll have a better shot at that in January than right now. Whichever one she chose I was going to run it with her and it couldn't have worked out any better.

We met in Cary at 5:30 with Mountain Girl Lisa and Ultra Angel Jenn for the ride down in Jenn's truck. Lisa and Jenn were going down to volunteer and support us. We made it to Derby about 7am giving us plenty of time to make final preparations and mingle with friends, some which I haven't seen since the Boogie.

Right on time at 8am Mark led us outside to the start line. It was a little cold but already it was obvious this would be a great day. We lined up with Mike Walsh and Lisa who was planning to run the first loop with us before beginning her volunteer duties. Mike asked if we were going to be walking the hills and I told him only we if we had too. Normally I would advise a first timer to walk the hills which is normal for all but the front runners in an ultra but I had told Karla we would just take it easy and if things went well I thought she should be able to run just about the whole race.

We did start off easy and it helped that just about all of the first mile is downhill. Mark Long, the RD had altered the course this year so we would hit the first set of hills just past one mile instead of 3 miles. We settled into an easy pace and the hills were soon behind us and we approached the first aid station where Jenn and Susan D were working. This one is located at the corner of Sycamore Lane and Karla was impressed with the beauty of this stretch of road. It is also my favorite section because there is a nice easy downhill for about a mile before turning onto the dirt road of Cedar Lane.

Soon we were coming into the 2nd aid station and the beginning of the new section on the back of the loop. Like the old route, it has an uphill climb of about a mile. It seemed to not be quite as steep but was also a steady climb without the flat parts that gave you a little break in the past. The first loop seemed to pass quickly and we were back at the lodge. After a quick pitstop we headed out again with Lisa still with us. We had averaged around 9:45-9:50 pace for that loop and Karla asked me if we would be able to hold a sub 10 pace the rest of the way. I said, I won't so no but I will say probably not.

Tony Rouse passed us while we were at the aid station but we caught up to him within a mile and he would stay with us for the next several miles. It was nice to spend some time with him. He and I have shared many hundreds of miles in these ultras over the years but not in over a year. Once again we moved easily over the hills and soon were back at Jenn and Susan's aid station and Tom Herbst was also there now. Lisa dropped here to begin her volunteer time so Tony , Karla and I headed off again after taking a short break to snap a couple of pictures.

When we passed the 17 mile mark Karla commented that it was hard to believe we had already gone that far. We were feeling great and making good time but I knew that a lot could go wrong quickly in one of these. We passed through the next aid station quickly and headed onto the new section for the second time. About halfway up the hill I had to stop and water the weeds so Karla and Tony ran on ahead. I didn't want to work too hard going uphill to catch them and Karla was running strong. She begin to pull away from Tony and it took me nearly 3/4 of a mile to catch back up to her. Tony would continue to drop behind but it was nice to run with him for awhile.

Although we were still moving strong we had fallen below that 10 minute mile pace now but both of us still felt great. After another short break we headed out again for loop three. Mike Walsh was just ahead of us and we caught up to him for a few miles of this last loop. Karla wondered if we would be able to run the hills the 3rd time but once again we cruised up and over them easily. Soon we were back at the aid station where Jenn and Lisa were waiting for us. In and out quickly and just a short time later we passed the marathon mark in about 4:30. Mike had already decided to take off again and was soon out of sight.

When we passed the 27 mile mark on the dirt road Karla commented that she had now crossed over to the darkside and I told her that yes, every step she took now was a pr. We counted down the miles and soon reached that last long hill. We were feeling the effects of the previous 29 miles but were still running strong. When we reached the final turn and a half mile to go , Jenn and Lisa had walked over to cheer us on and take some pictures. It was a joy to reach the finish line and celebrate Karla's first ultra. She did a great job, felt great, ran the whole way except for potty breaks and refueling at the aid stations and did it with a smile. I have also never felt better running an ultra.

We never saw Margo out on the course but Lisa and Jenn were keeping us posted on how she was doing out on the course. She had already finished and headed for home by the time we were done but Margo did awesome in her first ultra. 2nd woman overall and a fantastic time of 4:53 !!

On the way home I think Karla was already thinking about the next one. Welcome to the Darkside Marathon Princess !!!

Here are the photos I took.

Here are the results
Posted by runjoey at 9:31 AM

Your blog keeps getting better and better! Your older articles are not as good as newer ones you have a lot more creativity and originality now keep it up!