The last time I made it to a shirt run was in August of 2007 when I took Jenn with me to get her shirt and lifetime membership. That would turn out to be one of the most miserably hot runs I can remember and the sad part is it was my idea to get Mark to schedule that day since Jenn only has the rare Saturday off. I love to go to these runs and see so many of my Mangum Track Club friends but just was not able to find one to fit my schedule since that day . 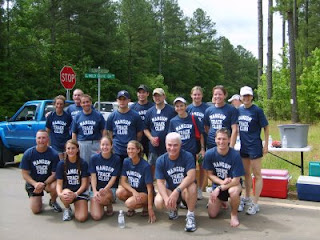 I was glad to see when Mark announced this latest one and was looking forward to going again. Karla and I have been doing our long runs together again since I started back running after the layoff back in January and this fit our training programs. I sent an e-mail to Margherita to see if she and Bill might be free. We have tried to get them to one for several years but she was never able to make it so I was happy to get her reply that she would finally be able to go with me.

Another friend Lisa Howell who ran with Jenn and I two years ago has been joining us on some of our long runs in Umstead and she was planning to return also so the five of us planned to meet for the ride down. You have to get up early to make it to these so we met in Cary at 6am. Margo was alone due to Bill having some back problems so me and the three ladies piled into Karla's Princess Carriage for the long ride to Mangum.

When we arrived in Ellerbe we saw that we wouldn't have time to make it to the dog pen for the shuttle so we drove straight to the start. It was getting close we thought but we would make it but as we arrived at the crossroads starting area at 7:57 the group was coming towards us on the road. Early starters! I can't believe they didn't wait for me. We quickly parked and prepared and in just a few minutes took off in pursuit of the group.

It was already a warm and humid morning and we started easily. As we approached the Mangun sign Laura was waiting to take our pictures. We took some of the ladies and then took off down the raod again. Laura ran with me just a minute and then took off quickly. A couple of miles later I stopped to water some weeds and by the time I caught back up to Karla, Margo and Lisa had begun to pull ahead. It was obvious they were feeling better and wanting to run faster than us so we settled in for a fun run along the road. We were steadily catching up to groups of runners and it was nice to see and greet friends along the way. Frank "The Professor" Sherrill rode by in his truck when we were about halfway and told me that I looked the best of anyone out there. I said it's the company I keep and he said that was what he was talking about. I have had the pleasure of bringing several beautiful ladies with me to join the club and run with me.

It was getting very warm, not nearly as bad as 2007 by any means but low 80's and humid is still uncomfortable. We were moving along and making a decent pace until just before the top of 1.4 mile Bethel Church Hill I began to fade. Karla waited for me at the top and we ran down together but on the former dirt road I began to fall back again. She waited for me to catch up again but as we came to the last little hill before the finish I had to let her go. Laura came up and ran the last 1/4 mile with me to the end.

Afterwards we hung around as usual for an hour or so eating pizza and getting caught up with old friends. Margo had a good run and got her shirt and is now a member for life in the awesome Mangum Track Club. Thanks to Mark and his volunteers for organizing, putting water along the course and having the food and drinks at the end for us.

I took just a few pictures. I was having a hard enough time keeping up with Karla

And here are some more pictures that Laura took
Posted by runjoey at 8:37 PM