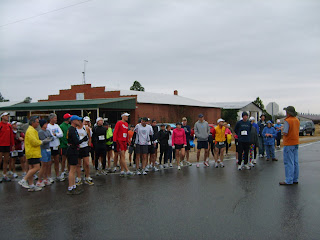 5:37:10. If you had me last year asked what I would have thought about running that time at this years Derby, I would have said, very disappointed. But as I was nearing the finish this past Saturday, I was and still am thrilled with the time and my race.

I've said it many times before that I love this race for many reasons but I almost didn't come run it this year. I have had so my set-backs with my injuries this year that I was afraid of doing further damage and I also knew I probably was not in shape to run it anyway. Things had seemed to be improving very much lately but then on Tuesday before the race I did a 10 mile run and by halfway I was hurting and by the time I made it back to my car my hamstrings were a mess. So knowing it was probably foolish to come run, I decided to do it anyway. I really wanted to be there and I also was going after my 5 Year Veterans Vest. I didn't care about the time but just had two goals this year and not 3 like last year. One was to finish and two was to not do any further damage.

I drove down to Pinehurst Friday night and then awoke Saturday morning to see a cold rain outside. Great. I would get to be slow AND miserable. Seeing the friendly faces of my MTC friends when I arrived in Derby quickly lifted my mood and the rain almost stopped completely as the time to start arrived. It was about 43F but calm and I knew I'd be warmed up soon as long as the rain held off. And then, Mark Long the RD sent us on our way.

I began at a very conservative pace, something new for me here. In the previous 4 years I had been seeking a 50K pr and was successful in that endeavor in each run. This year would be all about making it to the finish as comfortable as possible. I found myself running alongside Jimmy Ballard and we were having a nice conversation for a couple of miles but then I slowly began to pull ahead. The segment to the first aid station is the easiest of the course so I was relaxing and enjoying the easy running. Soon enough but probably 5 minutes slower than last year I came into the aid station which was being run by the Doom family. Just said Hi and grabbed some water and started back up the road.

The next section is where a few hills start and I was thinking this year I'd be walking almost all the hills but I was feeling good and fresh and decided to go ahead and run them this first lap. I'm glad I made that choice because I felt great and was soon arriving at aid staion 2. A cup of ginger ale and I was quickly out again. I spotted my buddy Tony Rouse walking up ahead so I took off to catch up to him. I was thinking he was going to miss his first Derby because I didn't see him before the race but when I caught up to him and Eric Fogelman, I found out that they had started early and were on their 2nd loop. I walked with them for a coupe of minutes and then we began to run together. Eric dropped back to talk to someone as we arrived at the dirt road so Tony and I ran on. It was great to run with him since I haven't seen him since the Boogie in June where we were running together until I dropped out in pain at 10 miles.

The next couple of miles passed quickly and we cruised up the hill to aid station 3. Just before we arrived it began to rain steadily. I left just ahead of Tony and assumed he would catch me but that would be the last I would see of him. For the remainder of the race I would be alone except for a couple of minutes later on when I would pass someone. Only two people would be passing me today which kind of surprised me as slow as I was going but it is normal in the race for things to spread out quickly.

My left hamstring was beginning to hurt but I found myself running in a good rhythm so I was just going with the flow. As I arrived at aid station 1 again, my leg was in quite a bit of pain and I was beginning to worry. Susan D. offered me some ibuprofen but I declined since I had taken some before the start and took off running again. Despite the pain I was still running well and feeling strong so I once again decided to run the hills. By now the rain was a little harder and a breeze had picked up and now I was getting cold. The only thing that was really bothering me were my hands . I hadn't worn gloves and wouldn't have needed them if not for the rain. I just pulled my hands inside my sleeves, but by now they were soaked and not offering any warmth as I ran directly into the wind.

The next several miles were pretty miserable but amazingly as I ran up the hills to the end of loop #2 my legs had quit hurting and my energy level was great. I was very happy that the rain was stopping just as I finished the 2nd loop. I continued to run easily toward aid station 1 for the last time but expecting at anytime for the crash to come. I just couldn't believe how good I still felt. As I left and headed up the hills for the last time, I was expecting to have to walk some of them but once again I had no problem, although I was beginning to slow down a bit. I was drying out and warming up a bit now although there would still be an occasional sprinkle, so I was much more comfortable this last lap.

I passed the marathon point in 4:40, about 42 inutes slower than last year but I didn't care because I was doing much better than expected. Surely I would start to suffer soon I was thinking to myself but the miles continue to fall behind me and as I hit the dirt road with roughly 5k to go I knew that today there would be no crash. I thanked God for giving me the strength to run so well today and enjoy a great race.

In all my years and many 50k's I have never been able to run all of one without walking. Even in my past two fast pr years, I had to walk a little up the last hills. So now I had a new goal. Run up those last hills for the first time. When I got to the end of the dirt road and began the climb I was again amazed that I didn't even feel the need to walk. Not walking was easy. I didn't have to dig deep or anything. I just ran like I was out on a regular training run and when I made the turn for the last 2 /10ths to the finish I was so happy. I had truly expected at the start to be well over 6 hours and exhausted but instead I felt great and thought I could easily have gone on and run a good 50 mile time. Awesome !

Thanks to Mark and the wonderful volunteers. It was a cold raw day out there for them sitting and standing around for hours and they stayed upbeat and friendly all day.
Posted by runjoey at 7:19 PM

Rock on Ultraman. Hate that I wasn't there with you!
JE

Joey, It is funny as we get older that a not so fast day, but a day of feeling good is rewarding. I am glad you had your day. This goes to show you that prayers are answered when we least expect them. Great Job, Rick