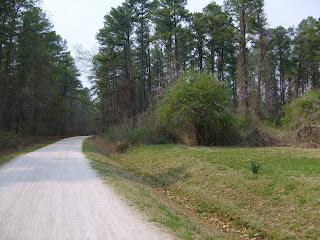 My home 100 Ultra is coming up this weekend and I'm getting excited to once again challenge myself on this course.
I learned of ultramarathons soon after I began running in 1977 but it wasn't until 1998 that I saw one first- hand. At the time I was doing little running and playing in an over 40 soccer league. I knew that the Umstead race had been held for a few years (1994 was the first) but had not made an effort to check it out. But on this day, I had a soccer game in Cary so before my game started I decided to drive into the park and check things out. I stood around watching for about an hour before it was time to head over to my game. Afterwards I returned to the park to watch some more around 1PM.
I had not been there long when I decided to start helping at the aid station at the lodge. I was amazed and intrigued by these amazing people and wanted to learn and experience as much as I could. I was soon put to work recording the runners split times as they came around to finish each loop. Eric Clifton would be the winner that year and I was in amazement that after running so far that he could still run so fast at the end. I also remember meeting Joel Zucker from NY. He was quite loquacious and made an impression on everyone around I'm sure. Sadly Joel, one of the founders of the ultralistserv would die later that year after finishing the Hardrock 100.
Also that Fall, I would tear my ACL in a game ending my life as a soccer player. I was Blessed to have a miraculous recovery from the knee injury and 3 months later began trying to see if I could become a runner again. I started cycling and swimming as part of my rehab of the knee and began participating in Triathlons. I continued to return as a volunteer for a few hours at Umstead the following years. Finally in 2002 I ran my first ultra and my knee was stronger than ever before the injury and to this day has never been a problem for me. Then in 2004 I was finally ready to run my first Umstead 100.
I hope to have time to post my report from that race this week if I can find the time. Until then you can check out the race website here