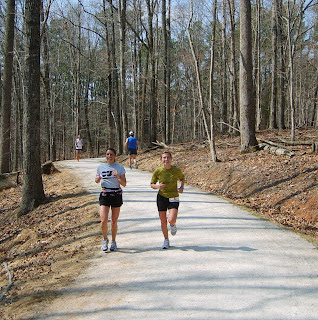 It was a very beautiful early March day for this years race. A bit too warm for a marathon maybe but there were some fast times. Not for me though. My friend Laura MacLean is in the green shirt in the photo with another fast young lady, Jeanna Chain.(Laura would finsh 3rd and Jeanna 4th in the women's race.) Laura would go on to run a very fast 3:36, an excellent time on this tough course. It's great to see her running so well lately.
After the full, hard schedule I ran in February I didn't expect to run a fast time but I did hope to have a good run and a good workout, but even going slower it was still hard. I made sure I got off to an easy start the first mile. Shortly after that my buddy Tony Rouse caught up to me. Tony and I find ourselves running together quite frequently and it's great to have him along for company. We began to pick the pace up a little and take advantage of some of the easier parts of the course but after an 8:19, 3rd mile we figured maybe we need to back off a little bit.
All of the single-track comes in the first 7 miles of the race so we were enjoying it but not trying to push too much. We were both feeling ok and running fairly well at this point. After reaching the aid station near 10 miles, I turned onto the South Turkey Creek Trail. It is nearly all downhill and I decided to take advantage of the gravitational aid and ran strong down the hill. Tony had stopped to refill his water bottle and it would be two miles before he caught back up to me. By the time we hit North Turkey Creek we both decided it was going to be a long slow second half to the race. It's almost like I was two people out there today. I felt great on the flats and downhills but as soon as we started climbing I felt weak and tired so we ended up walking most of the uphills the rest of the way.
The rest of the run was pretty uneventful, just slow and tired, but Tony and I were able to still smile and joke all the way back. Lots of volunteers, spectators and other runners were telling us we were looking good. We just figured they were liars, but as Fernado says" It's better to look good than to feel good, and we looked Mahvelous".
The Godiva Track Club do a great job with this race. The best part is so many Mangum Track Club and NCRC friends were participating so there were many friendly faces out on the course.
I ran with my camera again and got quite a few photos. My batteries died by mile two but I was prepared and changed them while running. Click here for the pictures
Oh yeah, my time was 4:38:03. It was my best time here but only by a little over a minute faster than in 2004.